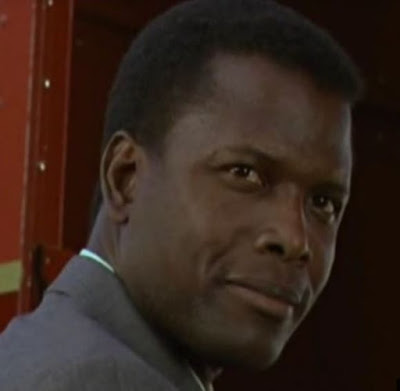 As film fans, many of us get so wrapped up in the idea of Sidney Poitier being a pioneer, because of the advances he has made for actors of color, that I think we forget that he is also one of the greatest film actors of all time. There's no part that is beyond his abilities and he's also a huge movie star.

Poitier's drawing power was enormous at the height of his career. In an age where star-driven vehicles were starting to fade, people went to his movies specifically because they wanted to see him. Roles were written with him in mind. For many years he was in demand, and he has maintained respect in a turbulent industry for his entire adult life.

Any one of his biggest successes could have made a legend of him: To Sir, with Love, In the Heat of the Night and Guess Who's Coming to Dinner, just to name his output in 1967. There's his Oscar-winning performance in Lilies of the Field (1963) and his remarkably assured starring debut in No Way Out (1950). He was a standout in Blackboard Jungle (1955), a sensation in The Defiant Ones (1958) and did some of the most sensitive acting of his career in A Patch of Blue (1965). This doesn't even include his fruitful directing career and the high profile roles he continued to play as he became a grandfather and later a great grandfather.

Since Poitier has been announced as a guest attending the opening night film, In the Heat of the Night (1967), at the 2017 TCM Classic Film Festival. What better time to celebrate some of the qualities that have made this remarkable man one of the most intriguing actors of the past century?

Smooth, seductive and often laced with a hint of humor, Sidney Poitier has one of the most entrancing voices of the silver screen. As he has aged, its power to mesmerize has only increased. Listen to the way he lingers over the names of items as he shops for groceries in this charming scene from A Patch of Blue (1965), lengthening the words and really enjoying playing with sound: 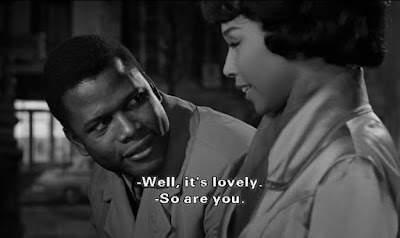 Women go crazy for Poitier in his films. Too often racial politics made him written to be inaccessible, but when he played a romantic lead, he was hot. A smooth-talking, handsome man who knows how to treat a lady? How could you not love him? He is especially sexy as an American jazz musician living in Paris in Paris Blues (1961). Paired with Diahann Carroll, he makes much of their considerable chemistry, purring his way through a sizzling flirtation scene on a bridge, and swooping up with puma-like grace to get close to her on a train. He's great at playing a lover, because he gives the woman before him his undivided attention and behaves as though no one else could be more fascinating. 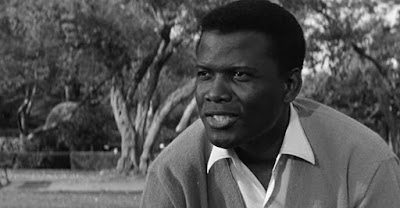 Cary Grant once said "it takes a strong man to be gentle." Poitier often seemed to take that idea to heart, playing many iron-willed, determined men who nevertheless could be gentle in demeanor. His tenderness towards an abused blind teenager in A Patch of Blue (1965) [can you tell I love this film?] is the perfect example of the powerful compassion he could bring to a role. You feel that he has power, but that he also knows how to use it without causing damage. When he appears, you know this girl is in good hands and that his kindness will help her to blossom. He is similarly tender with the rough-edged students of To Sir, With Love (1966), watching them carefully and never backing down, but always pushing back with the knowledge that they are fragile people. 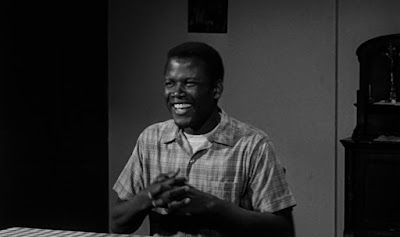 There's a sort of signature Poitier move that I love: it's an ironic tilt of the head, followed by a wry smile. He's done it in many of his films, and it never fails to charm me. This is an actor so appealing he all but forced those who would doubt him to fall under his spell. He is one of the few stars with such a powerful X-factor to push beyond the studio age into modern cinema. 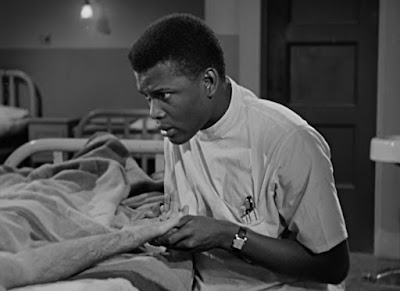 From his first major film role in No Way Out (1950), Poitier held the screen with unfailing confidence. For that job he had lied about his age, adding on a few years, but having already lived a challenging, intense youth, he had no trouble portraying a young intern preparing to take on the full responsibilities of his profession. From that film onward, he always held the screen as if he was lit with belief in himself, and given the resistance he faced, that is an especially admirable accomplishment. 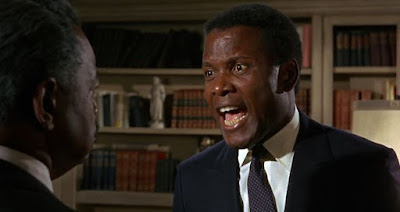 Poitier often played men who felt deeply and he rarely left any mystery as to what he was thinking. It can be exciting to watch him process all that is before him, and exhilarating when he decides to speak up and launch a perfectly-executed verbal takedown. 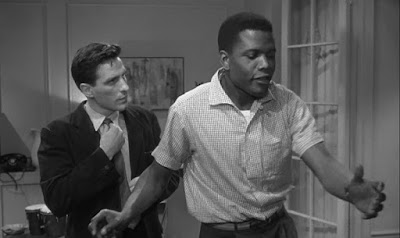 Funny, silly, carefree: these are not words you typically hear used to describe Poitier, but he has often been all these things. There's a devilish sense of humor to him that pops up in many of his films. He is especially fun to watch as a young stevedore in Edge of the City (1957) who tries to help his drifter friend (John Cassavetes) lighten up. It's a big job, and he takes it on with the determination of someone who feels inherent joy. Playfully teasing his wife and mother-in-law, dancing in his apartment living room and cracking jokes at work, he shows the best of that lightness of spirit that is such an important part of his appeal. 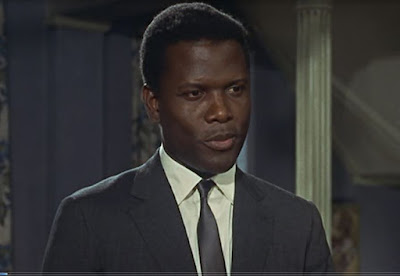 It doesn't matter what Poitier wears: suits, sports clothes, jeans jacket, it all looks impeccable on him. He should be as renowned as Gary Cooper or Cary Grant for the way he wears clothes. 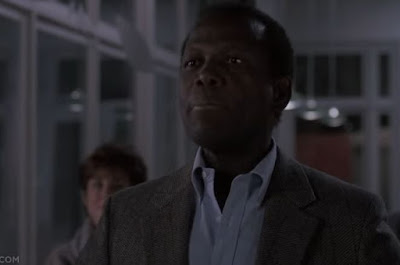 Poitier has a knack for playing relentlessly tough characters. The tightly-coiled, barely contained, but utterly controlled way he played police detective Virgil Tibbs in In the Heat of the Night (1967) is his boldest moment as a man who wouldn't bow to those who would oppress him. The actor, who was an active civil rights activist himself, came up the idea of responding to a slap from a white man with an almost instinctual return smack. He also made sure that the scene would appear in all prints of the film, wherever they would be shown. This was a bold move in an age where he had to request that as many scenes as possible be filmed in the north to ensure his own safety.

While I love the power of that classic moment, I'm more strongly affected by the small moments where Poitier asserts himself. He doesn't play characters who take abuse without a battle. Perhaps they might bend a bit in the moment, intent on self-preservation, but he made a point of not caving in to anyone who felt superior to him.

One of the best of those brief interludes is in Lilies of the Field (1963), in a scene where where he is talking to a construction manager who in their first moments has called him "boy." When that happens, Poitier barely reacts, but later in the conversation, when they are discussing employment, with subtle sarcasm he also calls the man "boy," readjusting his status with one word, and he does this to a man for whom he hopes to work! The gamble pays off too; he wins the respect he should have had at first glance.

I think it's funny that Poitier so often gets stuck with the noble label, because aside from having a mischievous sense of humor, according to a recent Hollywood Reporter profile, he is also quite foul-mouthed. Of course, as his godson Mike Jordan remarks, "He's one of the most eloquent curse-word users." While it is a bit of a shock to see Poitier drop the 'F' bomb in one of the climactic scenes of Sneakers (1992), it's also amusing, because he does make it seem graceful, though also perfectly cathartic.

At 90-years-old, Sidney Poitier still possesses all these qualities, and they are only the start of what makes him a legend.
Posted by KC