UPDATED WITH WINNER/GIVEAWAY! On Blu-ray: Paul Newman, Edward G. Robinson and Elke Sommer in The Prize (1963) 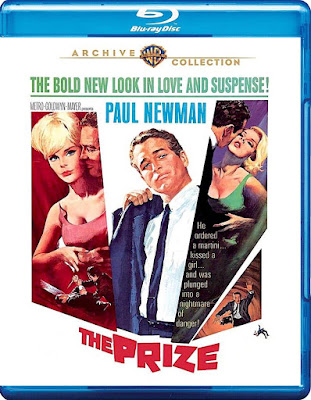 The Prize is an unusual film, with a mixed-bag cast and the unique premise of romance and intrigue in the milieu of the Pulitzer Prize ceremony. Starring Paul Newman, Elke Sommer and the eternally reliable Edward G. Robinson, it has the rare quality of seeming simultaneously familiar and bizarrely novel. Now Warner Archive has released this Stockholm-set thriller on Blu-ray, a copy of which I will be giving away! (See bottom of post for details.)

Newman and Robinson have traveled to Stockholm to be awarded the Pulitzer for literature and physics respectively, the former under the watchful eye of hostess Sommer, the latter with his niece (Diane Baker). They settle into a plush hotel where they are gifted with champagne and lavish gift baskets. Here we meet the other prize winners in a series of lightly humorous vignettes that belie the danger to come.

Notorious for heavy drinking and party boy antics, no one believes Newman when he begins to suspect that Robinson has been switched with an impostor. He keeps pressing though, and digging with that writer’s determination to reveal the full plot. Here the imprint of screenwriter Ernest Lehman (North by Northwest) is clear as the danger and mystery begin to imperil an essentially ordinary man who has no idea of the enormity of what he faces.

Though it isn’t as juicy, The Prize has the high gloss allure of large cast dramas like Hotel (1967) and Week-end at the Waldorf (1945). It makes no pretense of existing in a realistic world. There’s an artificial feel to the way the characters interact, who instead of having conversations seem to be announcing to each other the witticisms they’ve been thinking up in their spare time. That can be irritating or great escapism, depending on your mood.

Here Newman is especially guilty of his habit of seeming overly amused with himself, but when he is forced to focus on his physicality, as with a fast-paced bridge chase scene, he reveals great skill as a slapstick comedian. His romance with Sommer is perfunctory, for the most part because the actress was always a bit too cold and distant to be believable in a love affair. Robinson is typically in tune with his role and costars, hitting every note right with his reassuring ease.

It runs longer than it needs to, and the cast could stand a few stronger character actors, but it’s a fun bit of fluff.

Special features on the disc include a trailer for the film.

Warner Archive has given me an extra copy of the Blu-ray which I would be delighted to send to one of you. Giveaway for US residents only. To enter, leave a comment on this post telling me your favorite actor in the film and why. Responses due by Thursday, March 28. I will announce the winner on Friday, March 29.

Thank you everyone for entering! I loved hearing your thoughts about the stars. I have drawn a winner: egon_beeblebrox! Congratulations! Please send your mailing address to classicmovieblog@gmail.com and I will send you your Blu-ray.