As much of a thrill as it is to spend four days gorging on classic films, ask anyone what they like most about TCM Classic Film Festival and they will probably say the people. There are no strangers at this festival. Though we spend hours a day waiting in line for films, we do it cheerfully, because it offers the opportunity to talk about movies with fans that care about them as much as we do.

Every year I look forward to catching up with my film-loving friends at TCMFF. Many of us knew each other online long before meeting at the festival and we stay in touch on a daily basis, but nothing beats sharing quality time together in person. It gets better every year as our friendships deepen, despite the distance that separates most of us the rest of the year.

That said I also love meeting new people in line, in the lobby of the Chinese Multiplex and at Club TCM in the Hollywood Roosevelt Hotel. This year was especially fun in that regard. I met so many people from Chicago. Guess that’s prime classic movie fan territory! It was also great to chat with a retired opera singer who loves Barbara Stanwyck, a couple of foreign film fanatics, one of whom was wearing an Agnès Varda shirt like I was, and a friendly couple who recognized me from a TCM Backlots promo that seems to have neverending life on the network.

Almost as soon as I arrive in Hollywood on Wednesday afternoon, I begin to see familiar faces. I always meet up first thing with my festival roomie Laura . Over the course of the afternoon as we eat lunch, pick up media passes and shop in the TCM Boutique, we  catch up with many other friends who are doing the same. The lobby of the Hollywood Roosevelt Hotel is always a busy hub of happy reunions on this day.

For the past two years, TCM has replaced its festival press conference with a more socially-focused media reception. This is a great opportunity to connect with fellow writers, and meet with festival guests, network personnel, and hosts to get answers to any burning questions you might have about the festival.


Sometimes those questions are not as serious as you might expect.

I know it looks like we’re having a delightful conversation about film with TCM host Ben Mankiewicz in the photo below, but we actually cornered him so Angela could ask him if he liked the television show ALF, which I have come to see with new eyes myself through her fandom. He does not. She might have convinced him to give it another try though (probably not).

Before Mr. M. was whisked away by a pair of pleasant, but firm TCM folks (maybe to his relief?), I was able to thank him for calling my pen pal Angela (different from ALF stan Angela) to say hello.

I became acquainted with this lovely lady a little over a year ago, because she saw me on that ubiquitous TCM Backlots promo and noticed I was also from the Pacific Northwest. She’d actually been to the Hollywood Roosevelt in the forties and recalled meeting Randolph Scott, Joan Blondell and Cary Grant, who she calls “grumpy Grant” because he refused to give her an autograph.

Angela didn’t feel up to attending the festival, but asked if I could deliver a note to Ben during TCMFF 2018. When I did, he asked for her phone number, but I never thought he’d have the time to call. I was impressed by his determination to see it through months later. His response to my thanks? He smiled and said that it took him a while to convince her it was really him. I can just imagine!


After a quick dinner at Miceli’s, I headed to TCM’s Social Media Influencer Mixer at Teddy’s in the Hollywood Roosevelt Hotel. This is yet another opportunity to meet up with TCM employees and fellow writers, with the added fun of chatting with members of the lively TCM Party community that frequently watches films together on Twitter. I didn’t get around to taking many pictures as I was having too much fun to think about it! I did get a shot of two of my favorite Instagram fashionistas though. Rachel and Casey bring a lot of beauty to the world through their devotion to retro fashion. I highly recommend following them both:

It was touching to see how the TCM Party folks responded to the sudden and traumatizing deaths of #TCMParty regulars Vanessa Marquez and Andrea Rosen over the past year. There were all sorts of tributes to these much-loved members of the community throughout the festival.


I was most touched by a toast TCM Party regular Jeff, made to Rosen the night of the social media mixer. I don’t think it was easy for him to get up and do it, but he gave a beautiful tribute.

While I did not know either of these two women well, I do remember Rosen bouncing up to me at Mel’s during a group breakfast the first day of TCMFF 2018 to introduce herself. She struck me as a person who enjoyed life immensely. Marquez was an actress, perhaps best known for her roles in ER and Stand and Deliver, but to this community she was simply a tender-hearted fellow fan. It seems both ladies have left a beautiful legacy.


After the pre-festivities, socializing happens on the run, but it is no less satisfying. I get weary of all the selfies my friends like to take, but it’s wonderful to look at them later. Not only do I get to reminisce about our good times together, but I see myself grinning with pure joy and remember why I work so hard to make it to this event every year. All photos by me unless noted otherwise:

By the closing night party, I'm ready for a three-year nap, but parting is bittersweet:


Getting some post-party grease together at In'n'Out makes up for it a bit:


The camaraderie at this festival is unusual and addictive. Once you attend TCMFF, it’s hard to imagine missing a year, and indeed many people do attend every year they can. If you find your people, you keep them close.

It can be hard to come home from the festival when you've spent days with friends new and old who care about the things that give you life. One of my favorite things about this community is the pins many people hand out to promote their work and share their obsessions, because they are a daily visual reminder of the fun I've had. I usually give away a lot of my pins, because I hate to hold onto them if someone gets especially jazzed about something I have, but I did end up with an interesting collection: 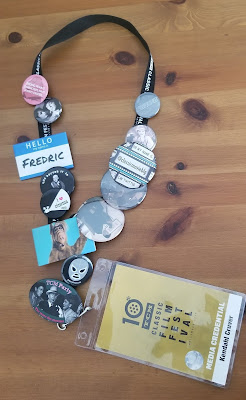 Loved the designs on these promotional pins:

The special interests are also fun:

I always wear my Kate Gabrielle ID pin at the festival. She creates these great TCMFF pin packs every year. They're very popular, so if you've been to the festival, you've probably seen them: 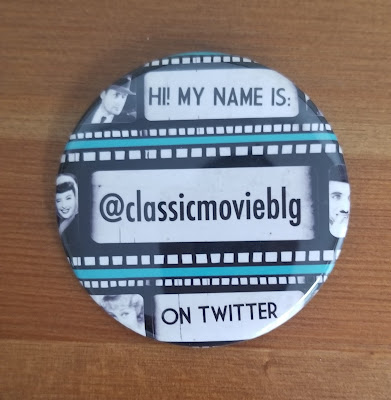 With all that hardware on your lanyard, you feel a bit like a summer camp counselor, but it's lots of fun.


Another great way to stay connected to the TCMFF community after the festival is via the many blog posts and podcasts about the event. Here's a few to get you started (if you have a link[s] to add, please comment below!)

Backlots
Day One: The Umbrellas of Cherbourg, Day Two: The Power of the Pre-Codes