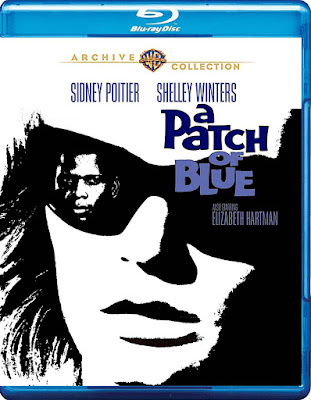 Though awarded and appreciated in its time, I’ve never felt that A Patch of Blue (1965) has gotten the attention it deserves. As a showcase for a pair of Sidney Poitier and Shelley Winter’s best performances, a wonderful debut for the delicate Elizabeth Hartman, and a tribute to the power of kindness and generosity, it is a soul-stirring film. Though not always easy to watch, it is immensely appealing and ultimately uplifting. I recently re-watched it on a new Blu-ray from Warner Archive.

In her film debut, Elizabeth Hartman is Selina, a poor, uneducated girl who was blinded in a childhood accident. She lives in a ragged apartment with her abusive mother (Shelley Winters) and alcoholic grandfather (Wallace Ford in his final role). Treated like a servant, and forced to string beaded necklaces to earn her keep, Selina has experienced little of the world beyond what she hears on the radio and has received no guidance as to how to navigate life blind.

Selina eventually convinces her mother to let her make necklaces in the park. There she meets Gordon (Poitier), a friendly, educated professional, who is also black, who frequents the park during the day because he works at night. Gordon feels sorry for Selina and in his increasing efforts to help her live a better life he comes to love her. With the specter of their racial differences always with them, they increasingly look to each other for companionship and fulfillment.

As Gordon, Poitier creates a rare portrayal of a gentle man with agency and ambition. He draws power from his empathy, creating a character that is romantic because he wants the woman he admires to become strong and independent. While he is often forced to become controlling in order to navigate various tricky situations, his goal is to live in harmony with Selina, his brother (a wary Ivan Dixon), and in a world that often views him with hostility.

Winters is the opposite of Poitier, relying on threats and violence to grab the things she feels life has unfairly denied her. She deservedly won a supporting actress Oscar for portraying a racist, selfish woman, who should be completely repulsive, but somehow manages to communicate a bit of the hurt and yearning within her whirlwind of anger. That Winters was devastated to have to play such a hateful, bigoted character makes her performance all the more remarkable.

It’s almost painful to watch Hartman at work. She’s so tender and fragile. Her delight in the small luxuries of life Gordon shares with her, like a carton of pineapple juice or a plate of canned peaches, is in dramatic contrast to the violence and chaos of the rest of her life.

Just like Selina, Hartman was emerging into a new world. The attention the shy actress won for her remarkable debut was difficult for her to process. She would go on to appear in several more films, but always struggled with her mental health, eventually committing suicide at the age of 43 in 1987.

Special features include a trailer for the film, a featurette about Elizabeth Hartman with behind-the-scenes footage and a glimpse at her charming screen tests, and a commentary with the film’s director Guy Green from the DVD release in which he shares pleasant memories of making the film and interesting tidbits like the fact that Hayley Mills was once in consideration for the lead.