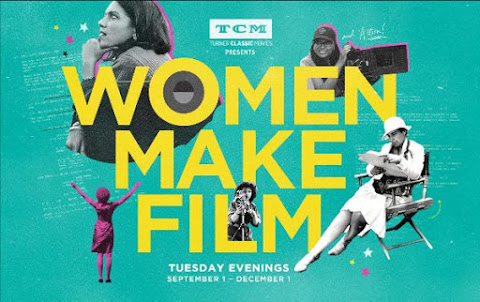 In the opening scenes of Mark Cousin's 2018 14-episode documentary series Women Make Film: A New Road Movie Through Cinema, narrator Tilda Swinton says that “most of the so-called movie classics have been directed by men.” For its television debut on TCM, each episode includes this in the introduction, acknowledging an exclusion of multiple dimensions, from an active desire to suppress female voices, to ignorance, to an incurious carelessness in distributing opportunity. This basic injustice should always be remembered, but the beautiful thing about Women Make Film is that while it acknowledges the struggles of woman filmmakers to make their work and be recognized, it focuses almost entirely on their craft.

Women Make Film is a deep appreciation and wide exploration of female filmmakers who have been making art as magnificent as the most celebrated male directors. The work of over one hundred women is sampled in brief clips, their form and effect discussed in the narration. The variety is stunning, demonstrating that “female” filmmaking has innumerable characteristics.

Instead of narrating himself as he did with the equally epic The Story of Film: An Odyssey (2011), writer and director Cousins has wisely chosen to have women take the reins this time. The pleasingly varied voiceover talents of Tilda Swinton, Jane Fonda, Adjoa Andoh, Sharmila Tagore, Kerry Fox, Thandie Newton and Debra Winger do much to enhance the equally diverse films and perspectives discussed.

The series is divided into chapters, about two or three are covered per episode, with subjects ranging from editing and tonal transitions, to themes like love, death, and politics. These explorations probe deep and some can be quite intense and adult. I am guessing that there will be outrage on the TCM message boards about parts of it, but that boldness gives the film an uncompromised potency.

Ultimately, Women Make Film succeeds because it gives the viewer reason to celebrate and encouragement to explore. The injustice and the horrid waste of cinema being so long the domain of white men can never be overcome, but there is still much to enjoy. From the most mysterious experimental works to heart pounding genre flicks and every conceivable form in between, Cousin’s film gives us many reasons to celebrate women who make films and a solid basis from which to reinvent the cinematic canon.

The film, which originally debuted at TIFF 2019, will run on TCM one episode at a time each Tuesday, from September 1 through December. Each of these nights will also feature a wide range of films directed by women. It’s a wide-ranging selection, covering a rich array of nations, races, and styles. TCM hosts Alicia Malone and Jacqueline Stewart will team up to present the films and given how effectively they have collaborated in the past, I am sure they will make this an exciting and illuminating series.