On Blu-ray: The Magnificent Esther Williams and Victor Mature in Million Dollar Mermaid (1952) 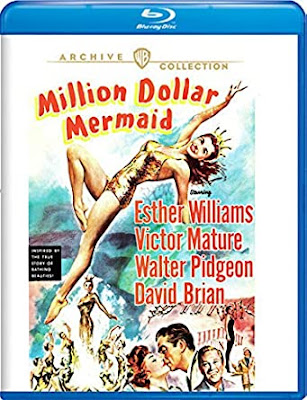 Before I saw Million Dollar Mermaid (1952) for the first time, I read the passage in Esther William’s juicy memoir about the hot after hours affair she had with co-star Victor Mature. For that reason, this film has always been extra spicy for me. I’ll never know how much of my enjoyment watching it has to do with me looking for sparks between those two.

It is a magnificent production though. This was a decade in which MGM reliably crafted boldly-colored, extravagant spectacles meticulously crafted to absorb the masses. While Esther Williams was hired for her abilities as a swimmer and performer in water extravaganzas, she was more than a pretty duck in a bathing cap. She didn’t have designs on being a great actress, but the camera loved her and she had charisma.

My favorite Williams flicks are the fluffiest: like Neptune’s Daughter (1949) and Dangerous When Wet (1953), where she flirts a bit on land, there’s a few musical numbers, and then she does her thing in the water. Million Dollar Mermaid is more ambitious than that; it’s a biopic of Williams’ sister in the water, Australian swimmer and vaudeville star Annette Kellerman. Of course it’s the glossy, MGM take on biography, with a light rendering of the contours of reality shined up with big romance and pretty production numbers.

While it doesn’t go down quite as easily as William’s lighter films, Million Dollar Mermaid works. It contains some of her most magnificently outrageous production numbers, designed with surreal flair by Busby Berkeley. The swimming star had great chemistry with Mature, and Walter Pidgeon is pleasantly avuncular as her father, so the rest of the film flows along nicely, but the unique magic of Williams in the water is timelessly fascinating and is what makes the film a must-see.

As far as Williams was concerned, this was her best work. There are photos of Kellerman visiting the set, posed happily with the star, so I am guessing she approved.

There's a a brief bio of Annette Kellerman and few clips from her films here in a post I wrote several years ago.