On Blu-ray: Teen Angst on the Airwaves in Pump Up the Volume (1990) 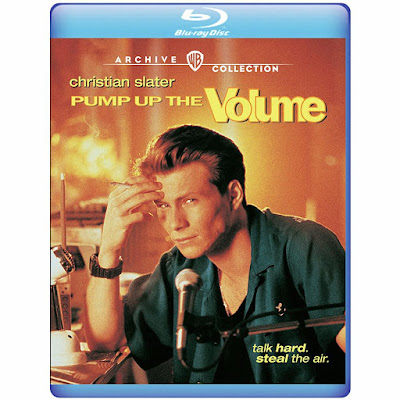 Pump up the Volume (1990) is decades newer than most of the films I review here. I do consider it deserving of modern classic status though. I wanted to write about it, because when I first saw it in the theater I expected it to make a bigger splash and influence more films like it. As it is, it has a solid cult following. Recently, I enjoyed revisiting it on a new Blu-ray release from Warner Archive.
My 80s/90s crush Christian Slater stars as the shy, lonely Mark, a high school student uprooted from the East coast to the West for his father’s career as an educational administrator. Unable to connect with anyone at school, he finds a way to speak out via his raunchy and high-spirited pirate radio show. The students at his school discover his late-night ramblings and embrace him because he speaks to their emotional malaise, members of what he calls an “exhausted decade.”
Having lived through this time as a teen, I did and still do relate to the blank feeling Pump up the Volume speaks to. It was a confused era for the young. Less politically aware than their parents and turned off by the consumerism of the eighties, these were the kids who listened to the rough and raw bands soon to be called grunge and learned about political injustice via the beats of Public Enemy, N.W.A., Iced T, and the like.
Pump up the Volume nails the awkwardness of being a teenager. How your words never seem to come out right or not at all. How you have a lot to offer, but no idea how to share it. How you rebel because you want control, though you don't fully know what you'd do with the power.
This was the first film Allen Moyle had directed since Times Square (1980), another movie that understood the awkwardness of not fitting in and the messy feeling of relationships when you are young. He would go on to direct what would become another cult youth favorite, Empire Records (1995). It’s a shame Moyle hasn’t made more films about the young, because he seems to have a good memory for how the confusion and disorder of growing up feels.
When Pump up the Volume came out, I assumed it would inspire more films like it. It was raw, energetic, and empathetic in a way that directors like John Hughes could never tap. This was what teens were really like. Instead, there was a bit of a void in the teen market until lighter fare like She’s All That (1999) set a new template.
Now, for better or worse, anyone can have a voice on social media. You don’t need Mark’s short wave radio set to reach the masses. As chaotic as that can be, I think it’s for the best. So many of our problems as a society are due to those without power having a voice and that has demonstrably proven to be one of the great perks of having free, potentially far-reaching platforms online.
Of course, something that powerful is going to have significant drawbacks; the combination of freedom and the means to speak always do, but sometimes I think we forget how much it connects us. Instead of the one-way or occasionally two-way connections of Mark and his radio station, the exchange is faster, wider and in many ways more effective.
Pump up the Volume is most powerful when it speaks to the need of having a voice and even more importantly, being heard.
Many thanks to Warner Archive for providing a copy of the film for review. To order, visit The Warner Archive Collection .
Posted by KC