Book Review--Elizabeth and Monty: The Untold Story of Their Intimate Friendship 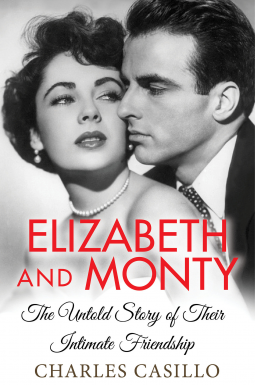 Elizabeth and Monty: The Untold Story of Their Intimate Friendship
Charles Casillo
Kensington Books, 2021
Elizabeth Taylor and Montgomery Clift had an unusual connection, particularly for Hollywood: a lasting, loyal friendship as intimate as a marriage, which endured throughout decades. In Elizabeth and Monty: The Untold Story of Their Intimate Friendship, Charles Casillo tells the story of their lives and how they supported each other through the best and worst of times.
Taylor and Clift met while making the George Stevens film A Place in the Sun (1951). Elizabeth was a teenage MGM player, while Monty was at the time a bigger star and more seasoned as an actor. He taught her that acting was something to take seriously, but there was also an immediate, visceral connection between the two. For her it was passionate love, but eventually he made it clear that he would always prefer men sexually, though he deeply connected with women emotionally.
The friendship that began on that production would last until death parted them, their loyalty to each other unaffected by distance, scandal, poor health, and the myriad disappointments that can complicated a life. They would make two more films together: Raintree County (1957) and Suddenly, Last Summer (1959), the latter due to Taylor’s instance that a troubled Clift be cast. Casillo explores the way their relationship changed, from Elizabeth’s early desire for Monty to the more enduring, soulful friendship that developed over the years.
Much of the story here will be familiar to fans of Taylor and Clift. Casillo draws heavily on Patricia Bosworth’s Clift biography and Kitty Kelley’s biography of Taylor. Aside from these more familiar sources, there are some interesting tidbits; I especially appreciated the insight from director Edward Dmytryk’s unpublished manuscript The Making of Raintree County, which reflects a critical time in Monty’s life and in his relationship with Elizabeth.
Of the first source interviews included in the book, the most revealing and touching memories come from actor Kevin McCarthy, who with his wife Augusta Dabney was a close friend of Clift’s, though the couple had to withdraw from him to a degree as his behavior became more dangerous and erratic. McCarthy’s point of view is important, because he was present for many of the key points of Clift’s life, from his start on the stage in New York, to the decline of his Hollywood career. Most importantly, he was a guest at Elizabeth Taylor’s house and was driving ahead of Clift down a twisting hill on the night he crashed into a tree, changing his face and his life.
The book leans heavily into the sex and scandals in Taylor and Clift’s lives, seeming to squeeze every last bit of sensation out of those elements. While these are important and even formative moments in their story, the degree to which they were lingered upon felt excessive.
I found the details of Elizabeth and Monty’s interactions more compelling. Their relationship was a fascinating combination of devotion and selfishness, tough love and absolute acceptance. While it was pure love that kept them close over the years, it is clear that a mutual understanding of the complexities of human relationships helped them through the rough spots. In the end, I saw their connection with more clarity and better appreciated how unusually strong their bond was.
Many thanks to Kensington Books for providing a copy of the book for review.
Posted by KC