On Blu-ray: A Legendary Series Ends with Song of the Thin Man (1947) 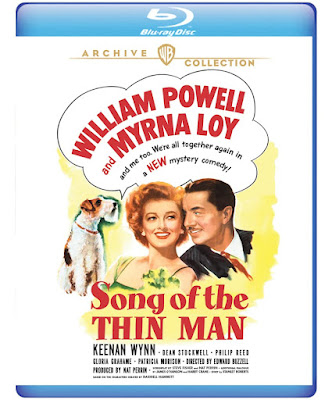 Every entry in the Thin Man detective series starring William Powell and Myrna Loy is worth the watch, but once the plots ceased to be based on Dashiell Hammett’s stories, the concept lost momentum. The final film, Song of the Thin Man (1947) has many of the best qualities of the other entries: clever repartee between its leads, a lively supporting cast, and dynamic settings perfect for crime. Still, it is clear that by this point the concept had lost its thunder and it was time to wrap things up for the cinematic versions of Nick and Nora Charles. I recently watched the film on a new Blu-ray from Warner Archive and enjoyed it, but also felt it was a good place for the six-film series to end.
A nightclub serves as the setting for the opening and closing scenes of the film and it’s an entertaining environment for intrigue. Gloria Grahame is the least believable chanteuse ever (not with that voice!), but she lip syncs with conviction while she stirs up passions in the band. The night of a charity event where she performs and Nick and Nora Charles are present, the bandleader is shot, setting the stage for mystery.
The Charles’ son Nicky Jr. is now a tween, perfectly cast with the clever and eerily wise Dean Stockwell. While a long scene featuring Nora ordering Nick to spank her son for misbehaving hasn’t aged well, it’s amusing to watch the senior Charles seeing visions of good times with his son in his derriere as he becomes increasingly reluctant to dole out punishment.
Song of the Thin Man relies on its strong cast, which also includes Keenan Wynn and Patricia Morison, for interest. The plot lacks cohesiveness and doesn’t build to a climax in an effective way. It is personality that brings everything together, as much as that happens.
Overall it’s nice to have the full series now available on Blu-ray. Despite the varying quality of the films, they’re all reliable mood-lifters.
Special features on the disc include the Passing Parade short A Really Important Person (starring Stockwell), the classic cartoon Slap Happy Lion, and a theatrical trailer.
Many thanks to Warner Archive for providing a copy of the film for review.
Posted by KC