Fly-By-Night at Noir City: First Time In a Movie Theater Since 2020 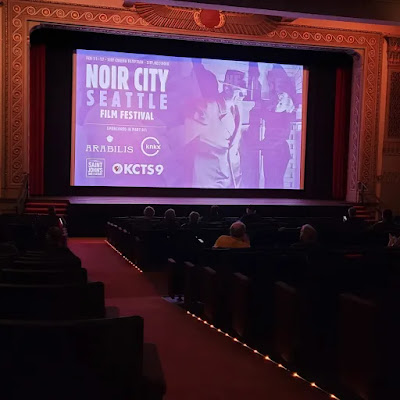 I hadn’t thought a lot about when I would want to go back to the movie theater after the pandemic had kept me away for so long, but I knew I didn’t want to make a big deal of it. It seemed best to me to be as spontaneous and unbothered about it as possible. When the opportunity came up to attend Noir City, the film festival produced by the Film Noir Foundation, I decided it was a good time to come back, because the last film I attended in a theater was at Noir City 2020.
My return film was the last of the festival: Fly-By-Night (1942). It was the perfect way to come back. I sat in my favorite seat in the back of the Egyptian Theater and felt safe because the screening was well-attended, but not crowded. I was able to keep my focus on the film.
Authors and film noir experts Vince and Rosemarie Keenan introduced the film. They’re a charming duo and I appreciated their pointing out that this was an early writing credit for Sidney Sheldon.
I’d never heard of Fly-By-Night and I purposely avoided reading anything about it before I watched it. I try to do this with Noir City screenings as much as possible, because I’ve always been able to trust their curating. It’s one of the rare places I can be truly surprised by a film.
The Keenans noted that this zippy B-production was in essence a knock-off of Hithcock's The 39 Steps (1935). It does have a lot of the same elements: a man and woman being thrown together by chance, his attempts to clear his name, her growing interest in this mysterious man, and the devious elements and spy drama around them.
I loved the screen pedigree of the stars: Nancy Kelly is most famous for playing the unfortunate mother in The Bad Seed (1956), Richard Carlson is best known as the scientist in Creature from the Black Lagoon (1954). And here they are together, long before those roles, in what can best be described as a comic spy adventure.
It’s impressive what director Robert Siodmak was able to pull off with a low budget and brief running time. Some of the stunts are so absurd you’d expect to see them in an eighties action flick, but they somehow fit in this quasi-noir setting. Terrifying things happen in this movie: murder, kidnapping, even bodily disfigurement, but it’s all whipped together in a frothy, lighthearted way. It’s astounding that it works so well.
Kelly and Carlson are a great team. It’s clear that Kelly's character is hungry for a little excitement and Carlson not only offers that, but an appreciation of her grit and independent spirit. It’s also refreshing to see a female role in which she is never helpless or on the sidelines, but rather an active participant in any fight, stunt, or challenge that arises.
It’s clear that Fly-By-Night was never meant to be more than a light entertainment, but it’s so well done that it’s worth a rewatch. It was a satisfying way to re-enter the movie theater. Noir City always comes through.
Many thanks to SIFF for providing tickets for the film.
Posted by KC