Book Review--Alicia Malone's Latest, Girls on Film: Lessons from a Life of Watching Women in the Movies 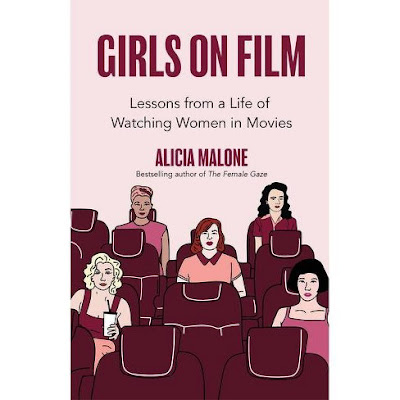 Girls on Film: Lessons from a Life of Watching Women in Movies
Alicia Malone
Mango Publishing, 2022
I was delighted to see Alicia Malone had published her third book, Girls on Film: Lessons from a Life of Watching Women in Movies, because I’m a big fan of her writing. Her straightforward, clear style appears simple, but it takes a lot of skill to communicate in such a direct, thorough fashion.
This time Malone has gotten personal, weaving a memoir into two things that have driven her life: the movies and how women are portrayed in them. I’ve read a few memoirs built around movie-watching, but never one that is so focused on a particular theme.
Malone has always been inclusive in her writing about film and aware that it is important to draw attention to underseen players in cinema, be they women, people of color, trans and non-binary artists, or other less appreciated and spotlighted populations. Here she draws her own perspective into that issue, admitting that she, like many accepted a cinematic world centered on white, cis, straight men for several years of her film fandom.
While unpacking her growing understanding of cinema and who and what makes it magical and meaningful Malone focuses on the movies that molded her and the issues most relevant to each title. Chapters are named for an interesting selection of films including Gentlemen Prefer Blondes (1953), Smooth Talk (1985), and Mad Love (the Drew Barrymore film, 1995). The movies are essentially a starting point for a fascinating series of reflections on personal, political, and societal issues, interwoven with a deep passion for cinema.
Having met many introverted film fans over years of attending the TCM Classic Film Festival, I feel confident that a lot of readers will cringe in recognition, and conversely feel a glow of delight, in the experiences Malone has to share. Many of us have felt the awkwardness of learning about too many life experiences via the often unreliable lens of cinema, of spending a sunny day inside watching movies, and of trying to share that love with a world that generally just doesn’t get classic films. We’ve also found escape, enlightenment, and never ending fascination via our cinematic obsessions. She may be more ambitious, glamorous, and focused than the typical film fan, but Alicia Malone is definitely one of us.
I’ve often felt frustrated that there are not more celebrated female film critics at the level of Siskel, Ebert, Maltin, and the like. In reading this book I realized that Alicia Malone has everything required to deserve that kind of status. I don’t feel there is yet the societal will to properly elevate and celebrate a woman of her intelligence and insight as a thoughtful authority on film (I hope I am wrong), but she has the goods.
Many thanks to Mango Publishing for providing a copy of the book for review.
Posted by KC