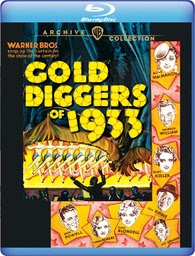 Golddiggers of 1933 is a triumph of cheerfulness and cynicism. Take that opening number, unfolding in the middle of the Depression. A chorus of glamorous showgirls garbed in golden coins, led by the upbeat and impeccable Ginger Rogers, sings about wealth and prosperity moments before their costumes are repossessed for non-payment. They will go home to steal milk from their neighbors, crammed together three to a room. It’s a number that dares to dazzle before quickly cutting to a shot of a producer played by Ned Sparks, chomping a cigar, unimpressed and sour-faced. It lathers on the cheer, but all the while it pokes at the worries of the time, a magnificent feat of escapism and realism combined.
I was giddy to watch the film again on a new Warner Archive Blu-ray. It certainly looked a lot better than the version I taped off public television as a kid and played to shreds. There’s something special about the films you’ve watched so much that you know every line, glance, and musical cue.
Golddiggers of 1933 possessed the best Warner Bros. had to offer: direction by Mervyn LeRoy, dance direction by Busby Berkeley, and a cast of the studio’s best players, including stars like Dick Powell, Joan Blondell, and Warren William and beloved character actors Guy Kibbee and Ned Sparks.
The film’s airy approach to the most dismal topics is remarkable. Starving chorus girls Aline MacMahon, Ruby Keeler, and Blondell lament their hunger and the poverty that has forced them to pawn their clothes and valuables. They also warn each other about handsy show producers, but always with a sarcastic smile and snappy delivery. Men with power like William and Kibbee try to control their world, but the steel beneath these cheery women always comes through, and they find themselves footing the bills for expensive hats and nightclub dinners.
Every other line tells you this is a pre-code movie and that racy vibe extends to the jaw-dropping Pettin’ in the Park number, which is horny even for the era. Pre-teen Billy Barty is dressed as a baby, rolling around on skates ogling scantily-clad show girls, they pretend to disrobe and shower behind a diaphanous curtain, and the final joke is a baby offering a can opener to a frustrated boyfriend who can’t handle his lady’s metal garb. Describing it all makes it even more astounding that it ever made it to the screen.
In the end Golddiggers of 1933 triumphs because while it faces reality, it also asks you to believe in millionaire songwriters with open checkbooks, stage productions that hire all your friends, and Broadway shows with a multitude of close-ups that no one in an audience could ever see. It closes with a devastating number about the plight of World War I's Forgotten Man and it somehow leaves you exhilarated. It looks at reality and gives you pure fantasy.
Among the many special features on the disc from previous DVD releases, there’s an especially interesting newsreel about the 42nd Street Special, a train which crossed the USA packed with film stars promoting Warner Bros. Bette Davis was on that train (and is in the reel); in an interview years later, she recalled that the train was not always well received, because wealthy film stars were the last thing a lot of struggling Americans wanted to see at the time.
Many thanks to Warner Archive for providing a copy of the film for review.
Posted by KC