Noir on Blu-ray: Repeat Performance (1947) with Joan Leslie, A Gem Restored and Saved from Obscurity 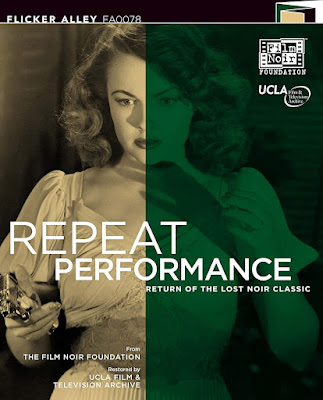 Joan Leslie spent most of her career playing sweet-faced ingénues, which isn’t unfortunate in itself, but she did have more to offer as an actress. She proves this in Repeat Performance (1947), a unique fantasy/noir/melodrama in which the actress plays her most complex and mature character.
Now available on a DVD/Blu-ray release from Flicker Alley, this production was almost lost to time, barely saved from a tattered print. Thanks to the fundraising of the Film Noir Foundation and restoration efforts by UCLA Film and Television Archive, Repeat Performance is not only available, but it looks amazing.
Leslie stars as Sheila Page, a successful stage actress in a toxic marriage. She commits a murder in the opening scene and, blaming it on her bad choices over the past year she wishes she could live 1947 again and fix everything. Basically she wants to rewrite this act of her life, just like the plays in which she stars. She gets her wish, but quickly learns how little control she has over her alcoholic, resentful husband (Louis Hayward) and those around them.
One of the best elements of the film is the supportive men in Sheila’s life. As her producer John Friday, Tom Conway is sympathetic, supportive, and believes in her no matter what wild stories she tells him about bending time. In his film debut as Sheila’s queer-coded poet friend William, Richard Basehart is also moving as a thoughtful and wise confidant whose gentle demeanor is at odds with the chaos around him (he’s also got the most luscious head of hair). It makes her co-dependent marriage with Hayward seem all the more absurd as she is putting so much into an unhealthy relationship when she is surrounded by far better examples of masculinity.
The fantasy portion of the film is almost an afterthought. It plays with time as a means to launch the noir/melodrama. Once Sheila leaps into the past, little is said of it; there isn’t even much astonishment.
Instead, the focus is on a cast of characters which proves to Sheila’s increasing frustration that trying to control people like characters in a play is a futile pursuit. Among them are Natalie Schafer, who purchases men for herself as a supposed patron of the arts (she doesn’t know what to make of the less-than-responsive William), Virginia Field as a playwright with her sights on Sheila’s husband, and Ilka Grüning as the refreshingly uncomplicated Mattie, who provides a palate cleanser by only wanting a glass of sparkling burgundy and a good time.
It’s a gripping film, full of bad decisions, wild twists, and haunted by fate, which is why I think despite all the melodramatic elements, it earns the distinction of noir.
The set is a typically thorough Flicker Alley release, with film commentary by noir expert Nora Fiore, a video profile of Joan Leslie hosted by Farran Smith Nehme (aka The Self-Styled Siren), a documentary about Eagle-Lion (the company that released the film) hosted by Alan K. Rode, and an introduction by Eddie Muller which makes clear how close this film was to disappearing forever. I also appreciated the comparison between film and source novel in Brian Light’s essay in the set’s accompanying booklet; there are some significant and telling differences between the two.
Many thanks to Flicker Alley for providing a copy of the film for review.
Posted by KC