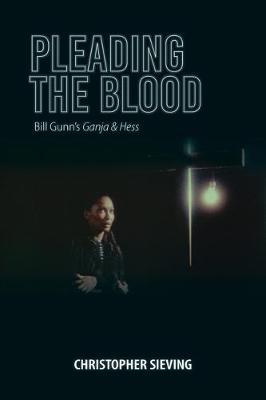 Pleading the Blood: Bill Gunn’s Ganja & Hess
Christopher Sieving
Indiana University Press, 2022
The career of actor, writer, and director Bill Gunn is a bittersweet story. While the things he accomplished were impressive, he could have done much more. In a new book, Pleading The Blood: Bill Gunn's Ganja & Hess, Christopher Sieving tells the story of this uniquely talented filmmaker and his greatest film, the vampire/addiction horror drama Ganja & Hess (1973).
As a longtime fan of Gunn, and Ganja & Hess in particular, I was grateful for this thoughtful and thorough approach to his work. While effective as a monograph of the film, the book also serves well as a biography of Gunn. It was fascinating to learn about his childhood as a prodigy and social outsider, which foreshadows the many ways in which this filmmaker would struggle to find his place in the world. I also found it helpful to get an overview of his career, which enabled me to properly place Ganja & Hess as both Gunn’s greatest success and most profound disappointment.
Aside from the clear road blocks Gunn encountered due to his race (and his resistance to restricting his output to supposed “black issues”), he had an unusual sensibility that alone would have made it difficult for him to find a place in popular culture. His first and frustratingly unavailable film Stop! (1970) is a good example of this. Mysterious and unconventional, but with a strong voice; it is a valuable piece of work, but not easily accessible (both physically and intellectually, it has never seen release in theaters or on video).
If this kind of film were to find even moderate success with a major such as Warner Bros. (which hired Gunn to make Stop!, but then buried the film), perhaps it could have heralded an acceptance in the United States of the kind of unconventional European-style art film that Gunn found inspirational. In essence, it is a film for grown-ups, one that doesn’t giggle at sex, thoughtful conversation, or challenging ideas. Gunn would go on in the same mode while filming Ganja & Hess, capturing characters that don’t hesitate to embrace their desires or ask hard questions.
Sieving explores the many ways Gunn struggled to find funding and acceptance of his work. He spotlights his frustration and anger, which are in contrast to his generosity as a filmmaker to cast and crew. A brilliant collaborator and mentor, Gunn couldn’t find that same spirit of trust and support when it came to investors and studios, not to mention the mainstream press.
It’s a revealing book, full of triumph and disappointment, with a strong message that we could have and still need to do much better as a society in supporting a diverse array of adventurous artists if we are to get the best our culture has to offer.
Many thanks to Indiana University Press for providing a copy of the book for review.
Posted by KC