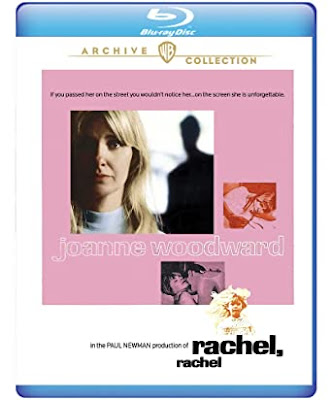 Rachel, Rachel (1968) was Paul Newman’s directorial debut and a gift to his wife (he also produced). In the years since her Oscar win for The Three Faces of Eve (1957), he had gone full speed ahead with his career, while she had devoted much of her time to raising their three daughters, working in some capacity, but too guilt-ridden about going on location as her husband did. As an offering and a career boost, the film was a boon for Woodward and Newman. I recently watched it on a new Blu-ray from Warner Archive.
Based on the novel A Jest of God by Margaret Laurence, with a script Rebel Without a Cause (1955) scribe Stewart Stern, it is the story of small-town Connecticut schoolteacher Rachel (Woodward) who lives with her controlling, if loving mother. The action begins as Rachel realizes she’s hit the midpoint of her life feeling lonely and uninspired. With a combination of passivity and a tentative sense of adventure, she allows new influences into her life: religion, sex, and the possibility of starting anew.
The results of Rachel’s willingness to accept change are realistically messy, but worthwhile. When a religious zealot loudly preaches about how we “languish in the deep and lifeless dungeons of ourselves,” she is disturbed, because she feels the sentiment profoundly. An affair with a mildly charismatic, but caddish former schoolmate (James Olson) also opens her eyes, though it is of benefit to her in an unexpected way.
Rachel’s story unfolds in three worlds: her present, her childhood, and her imagination which pulses madly with daydreams and intrusive thoughts. These three viewpoints make her whole, because we are all made of who we were, who we are, and who we would like to be. Once she has torn away the boundaries of her life, she learns more about the latter and how to move forward.
It’s a story that could have been glum, with a drab, pathetic protagonist, as is often the case. Often the problem in portraying this kind of woman is that her creators believe she needs to change, to become more appealing to the audience. Woodward, Newman, and Stern all play a role in making this single, virginal school teacher an intelligent, beguiling soul, who is simply stuck and needs to change her circumstances. She is given the grace to be messy while in essence keeping her dignity and personality intact.
Special features on the disc include a silent real of promo footage for the film and a theatrical trailer.
Many thank to Warner Archive for providing a copy of the Blu-ray for review.
Posted by KC