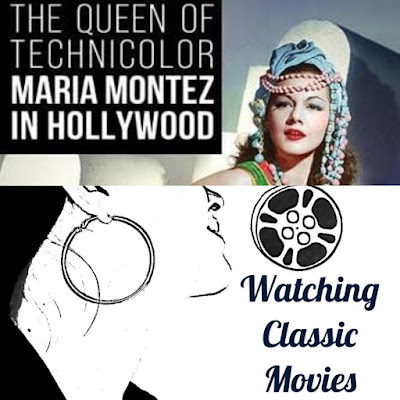 My guest, Tom Zimmerman is the author of The Queen of Technicolor: Maria Montez in Hollywood.
Montez was a unique star, imperious, but warm, not known for her acting ability, but skilled in committing completely to a role, whether in a skimpy costume for the six legendary Neverland films she made for Universal, or in a grittier setting, such as for her more noirish European roles.
We talked about the magnetism, determination, and integrity of this remarkable woman.

The Queen of Technicolor: Maria Montez in Hollywood by Tom Zimmerman, is a publication of University Press of Kentucky. There are links to several places where you can purchase the book on their website.
Films discussed:
Boss of Bullion City (1940) (Maria’s first role) South of Tahiti (1941) (Maria’s breakout sarong role)
The Universal Studios Neverland Films (not discussed individually):
Arabian Nights (1942)
White Savage (1943)
Ali Baba and the Forty Thieves (1944)
Cobra Woman (1944)
G*psy Wildcat (1944)
Sudan (1945)
Tangier (1946)
Pirates of Monterey (1947)
Wicked City (1949)
Portrait of a Killer (1949)