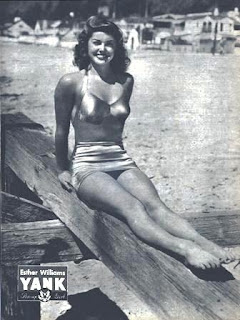 Tomorrow Esther Williams, MGM’s Technicolor mermaid of the studio age, will turn 88. What a fine opportunity to celebrate some of her best movies:

Bathing Beauty (1944)
This is the movie that truly made Esther Williams a star. Though the original title of this musical comedy had been Mr. Co-ed, sometime during production, studio executives realized that it was Williams, not her costar Red Skelton, who was grabbing attention. In addition to the name change, she was now featured in the advertising, wearing her swimsuit of course. She actually spends most of her time on dry land, but her two swimming scenes are each memorable in their own way. The first scene is rather low-key; Williams frolics happily in an outdoor pool, wearing a bright pink swimsuit and a glamorous smile. It’s a pleasant, but simple scene, totally unlike the grandeur of the finale, which included a jawdroppingly huge pool, dancing girls both dry and wet, shooting fountains of water. This amazing number would create the template for not only a new kind of dancing, but an Olympic sport. It was also the source of endless parodies, a true sign of success.

Take Me Out to the Ball Game (1949)
There is a quote attributed to comedian Fanny Brice in which she says of Williams, “wet she’s a star, dry she ain’t.” I beg to differ. While she was not a legend on the level of Judy Garland, she had star power, and effective training from MGM helped her to build upon her natural presence. Unlike many actresses who were not primarily singers, she was able to record her own songs, and she had both dramatic and comedic skills that at least equaled many of the other musical ingénues and actresses on the lot. I think this movie is an excellent example of a successfully “dry” Esther Williams (there is only one brief scene in a pool and it isn’t a production number). She can’t dance, and she certainly isn’t going to steal the movie from Gene Kelly and Frank Sinatra, but she has great comic flair and definitely holds her own against her more seasoned costars.

Million Dollar Mermaid (1952)
The amazing Busby Berkeley-choreographed swim ballets are reason enough to see this sometimes slow-moving biopic of Australian swimmer Annette Kellerman. Williams is beautifully matched with Victor Mature as her irresponsible, but charismatic love interest. Walter Pidgeon is warm and dignified as her father. But back to the swimming: these are the most glamorous, inventive and surreally beautiful routines Williams ever performed on the screen. They were also often very dangerous; Williams broke three vertebrae when she dove over fifty feet into the water from a tiny platform. She was in a body cast for months.

Dangerous When Wet (1953)
Co-starring with her future husband Lorenzo Lamas, Williams is at her most playful in this musical comedy with a touch of drama. Lamas had been a swimming champion in his native Argentina and Williams was pleased to be well-matched in the pool (on occasion, she had had to hold up other male costars while they swam). She also has another strong supporting cast, with William Frawley as her father and long-legged Charlotte Greenwood as her mother.