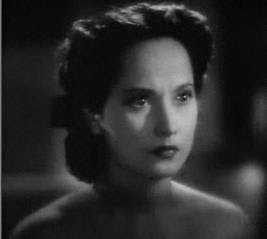 It was great to see Merle Oberon get some attention yesterday as a part of TCM’s Summer Under the Stars series. I thought I’d extend the Oberon love with a few more great movies starring this elegant actress:

These Three (1936)
This is one of Oberon’s best performances, mostly because of director William Wyler’s firm guidance. Stripped of glamour and her typically regal bearing, she brings a delicate balance of intelligence and vulnerability to her role as a school teacher subjected to scandal and false rumors.

Dark Waters (1944)
Oberon brings neurotic tension to her portrayal of a rich woman who has survived a shipwreck, only to find herself in another dangerous situation. The plot of this thriller is standard, but the Louisiana bayou setting and Oberon’s dark beauty add an extra charge.

Lydia (1941)
This period weeper features Oberon in her element: beautifully dressed, in glamorous surroundings and unhappy in love. She plays an elderly philanthropist who has never married, though she pines for a lost lover. She tells her story to the three men whose proposals she once rejected, over the course of a bittersweet one night reunion. It can be difficult to find a copy of this movie, but if you like the lushly romantic side of Merle Oberon, it is well worth the effort.

The Cowboy and the Lady (1938)
Oberon plays a socialite masquerading as a maid and Gary Cooper is the cowboy who falls for her in this comedy romance. They make such an odd match that, despite being saddled with a boatload of clichés and uneven pacing, they are sort of fascinating to watch together.