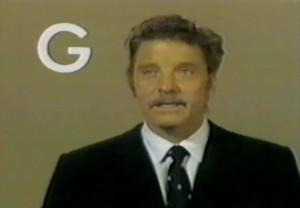 Ever since I read this item about James Earl Jones and Burt Lancaster performing on early episodes of Sesame Street, I've been dying to see Lancaster recite the alphabet. He also did a segment where he does push-ups while counting. I must see these clips!

I've seen this James Earl Jones clip (and another of him counting) in several places online:

So where is Burt? Is this on a DVD I'm not aware of? Or is there a clip floating out there somewhere?

By the way, I think it's hilarious that James Earl Jones thought the Muppets would scare children, because I think his intense, steely-eyed rendition of the alphabet is much more intimidating (if very cool). He kind of looks like he wants to start a fight.

The pic is from Muppet Wiki. Isn't it fantastic to know that there is a Muppet Wiki?
Posted by KC