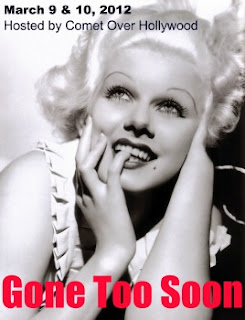 This post is part of Comet Over Hollywood's Gone Too Soon blogathon. Check out the rest of the contributors this weekend.

When I signed on to write about Robert Williams for the Gone Too Soon blogathon, I was excited to learn more about him. I’d always meant to research his life. After searching through loads of books and websites, I’ve ended up knowing only slightly more about him than I did before. That is, in essence, that he was a comic from North Carolina who started to make a break-through when the new talking movies needed performers who had a flair for dialogue.

Williams made only one memorable movie, Platinum Blonde (1931), costarring Jean Harlow and Loretta Young and directed by Frank Capra. Shortly after that, he got appendicitis while on vacation and died of peritonitis as he waited for surgery. Four days after the premiere of the film, he was gone at age 37. 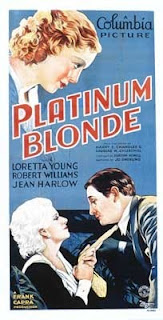 Before Platinum Blonde, Williams appeared in six films: a few silents (two of them shorts) and three talkies in which he played secondary roles. He started to hit his stride with sound films, and Capra’s movie would likely have been the one to set him on his way to a strong career.

Williams’ distinctive blend of sharp humor and sweetness distinguished him from the more abrasive comedians of the day. He wasn’t matinee idol handsome, but with his tousled hair and gently blinking eyes he was attractive, and he had a way of being courtly to a woman that surely led to a few swoons.

The funny thing about Robert Williams is that while he is easy to compare to other actors, his appeal was unique. He was just about a dead ringer for Lee Tracy, though he was better looking. He also had a similar skill for rattling off lines, but in a smoother and less obnoxious style. Williams also had the same sleepy eyes, floppy hair and loose physicality of Robert Mitchum, though he had a sweeter, less rugged demeanor. He pulls his words out like James Cagney, though when he says “is she bee-you-ti-ful?”, it isn’t as snappy. Instead, he touches gently on each syllable.

Williams’ performance style was also somewhat reminiscent of Marlon Brando’s. It may seem like a stretch, but the more I watch him, the stronger that connection feels. The most satisfying bit of information I was able to drag up in my research was this quote from an interview with Christopher Plummer. The actor said that Williams was:

...one of the most realistic comedians the screen had. He made Cary Grant look like he was overacting....To watch Robert Williams act was like seeing a comic using the Method, long before the Method became famous.

It is this quality that brings Brando to mind. Williams had a similar sense of seeming laidback and natural, while clearly staying in control. He’d throw out lines out like he was tossing cards into a hat, but his timing was precise. His loose manner brought life to the static world of early 30s films, where Hollywood was starting to understand how to make a talkie, but not quite there. It would have been fascinating to see him play opposite Brando in a 1950s drama.

While Williams had all the snap and crackle of a 1930s film actor, he also had several modern qualities. There’s a rebellious tone to his performance in Blonde that would have translated well to modern movies. You could see him as a counter culture hero or a police detective fighting the system in a gritty 1970s flick. With his fast-talking and snappy style, I think he made his mark in the right time, and it would have been interesting to see how he developed throughout the decades to follow.

I have the feeling Robert Williams would have kept at it until the end, no matter how long he lived. Sadly, it wasn't long enough.