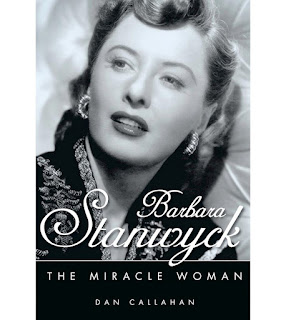 Barbara Stanwyck: The Miracle Woman is more a critical review of Stanwyck’s career than a traditional biography. This is an appropriate choice, because the woman lived to work. Author Dan Callahan demonstrates how her anger, frustration and the violence and neglect of her hard-luck childhood helped to mold her performances. For what is essentially a career assessment, he ends up revealing a great deal about her character. I’ve been reading about Stanwyck for years, and I feel like I’ve never known her better.

The book is divided by films, with some chapters consisting of several movies from certain periods, such as pre-codes, and films made with specific directors including Frank Capra and Preston Sturges. Some are grouped into genres, including Stanwyck’s favorite, the western. Movies with a big reputation are given their own chapters, even if the author does not necessarily feel them worthy of the extra analysis.

This respect for popular and critical attention to Stanwyck’s films helps to keep the book from drowning in personal opinion. Callahan is clearly a fan, and he has strong views on Stanwyck’s work. Sometimes this drove me crazy, and I felt like I was in a coffee shop having an argument after seeing a film. Often I gained a new, and sometimes delightful, perspective from his analysis. Overall, these opinions come from a knowledgeable critic. Callahan has clearly done his research and has spent enough time in Stanwyck’s world to have a good idea where she came from and how she operated.

I relished the detail in Miracle Woman. It pays great tribute to the small gestures and moments that can color a whole performance. Stanwyck was not a stage actress; she worked specifically for the camera, and by understanding the nuances of her acting, Callahan captures much of what made her so arresting.

There’s a lot of plot detail in the book, including spoilers, and it could be frustrating reading for those who have yet to dig deep into Stanwyck’s filmography. I believe that these kinds of readers would find it worthwhile to attempt to skim past those plot points before seeing the films. I found myself both curious to check out the films I hadn’t seen and to re-watch titles I’d already seen many times. Even the supposedly lousy movies seemed intriguing once I learned more about them.

I’d love to see this author try the same treatment with different actors, though I suspect that he’d have to be as invested in them as he is Stanwyck. You get the sense he cares about her, and that he is as aware of her faults as her strengths. It is that quality which lends the book a special sensitivity. He demonstrates an understanding of Stanwyck that helped me to trust his point of view. I was open to hearing her story from his perspective, whether or not I agreed with his conclusions.


Thank you to the University Press of Mississippi for the opportunity to review this book.
Posted by KC