The Mary Pickford Blogathon: It's Here! 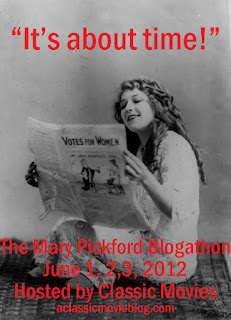 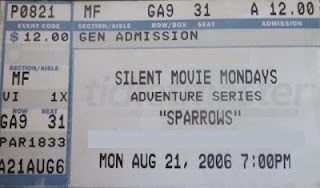 This screening was part of a great silent movie series in my city. I was pretty sure this was the first time they had shown a Pickford movie. About five minutes into Sparrows, I wondered what had taken them so long.
It helped that I was watching the film in a gorgeous theater with an enthusiastic audience and the accompaniment of a first rate organist, but that was clearly the icing.

Pickford charmed the audience immediately. I'd never seen such a giddy reaction to a film performance. You could see the glow of teeth in the dark. We couldn't stop smiling at her!

Maybe some of the crowd walked in there with the same misconceptions about Mary I had. I'd been almost reluctant to see the film, because photos I'd seen of Pickford in curls and Mary Janes had convinced me that she was too old-fashioned for even a devoted classic movie geek like me.

I was so wrong.

Pickford had a remarkable ability to transmit her thoughts in a crisp, direct fashion. There was no set method to it; she just used her common sense. When she thinks she's in trouble, when she's delighted or, my favorite, when she's getting pissed off at some rotten bully, you can see it coming on as if she's telegraphed the message to your mind.

A lot of that skill came from observing human behavior. Pickford was particularly clever in the way that she used her study of children to play her famous little girl roles. With precise body language, from the way she held her jaw to the bounce of her walk, she could believably play young girls into her thirties. It took much more than short stature and a youthful appearance to be able to do that well.

As Mary plowed her way through the virgin territory of the movie industry, she was first in so many ways that you get weary of keeping track. I think this has hurt her legacy as an actress. Constant reference to her accomplishments has drawn attention away from her genius for creating riveting performances that were pure cinema. It's easy to be astonished by all she has accomplished, but sometimes you need to set all that aside and just pay attention to the woman on the screen.

What I love about the participants of this blogathon is that you all do get what's wonderful about Mary Pickford and I sense that you want others to discover her too. Thanks to all of you for helping to bring attention and admiration to this remarkable woman.

I hope you all will enjoy the posts and leave lots of comments for this talented group of writers.

As many of you know by now, author David Menefee has generously donated an signed copy of Sweet Memories for the blogathon. The book is an entertaining fictional retelling of Pickford's early life and career as envisioned by her mother Charlotte. If you would like to enter, all you need to do is tell me one thing you like about Mary Pickford in the comments. It can be something you like about her personally, something she once said, a film or even a moment from a film.

I will put all entries into a stylish toddler sunhat and draw a winner on the last day of the blogathon.


And now on to the posts. Happy reading!

My special guest today is author and filmmaker Sarah Baker, who has written a fascinating post about Jack Pickford's first wife Olive Thomas and the tragic star's relationship with Mary.

A Mythical Monkey Writes About the Movies, Amarilly of Clothes-Line Alley (1918)

My special guest today is actor and writer Stephen Jared. He has written a touching post about Pickford and Douglas Fairbanks. It's interesting to hear about this relationship from the perspective of a working actor. (I love Jared's quote about his roles in the author bio of his new book Ten-A-Weak Steale: " He is cast frequently as a dimwit, occasionally as a cop, and every once in a while he plays a dimwit cop." I'm also endlessly impressed by his long run as the classic dimwit "Phil" in a series of Jack-in-the-Box commercials. This guy would be right at home in a screwball comedy. All the good character roles are in ads and cable these days.)

What Happened to Hollywood?, Still Fighting for Hollywood: Mary Pickford

11 East 14th Street has contributed all sorts of goodies:

Pickford and Griffith: The Clash of Film's First Great Egos

"We Don't Deal in Words Here" The Biograph Actors on Acting

Goin' to California, 1910 and a Mountain of Dreams

Once Upon a Screen, Romance of the Redwoods (1917)

My special guest today is author and Pickford biographer Peggy Dymond Leavey. In a fascinating Q&A, she shares her thoughts on Pickford and the process of researching and writing her book, Mary Pickford: Canada's Silent Siren, America's Sweetheart.

Krell Laboratories, A first experience with a Pickford film

The Most Beautiful Fraud in the World, Mary Pickford! America's Freakin' Sweetheart!

A Twitter entry! From Chris Giddens, @chrisgiddens, Jollification: Heart o' the Seagulls [Mary Pickford] Aside from being really cute, and the reason for my most recent big smile of the day, this video beautifully demonstrates why developing a strong soundtrack is such an important part of restoring silent films. This scene plays so differently with a modern soundtrack!

My Love of Old Hollywood, Hollywood at Home: Pickfair

Don't forget to enter the book giveaway! Just tell me one thing you like about Mary in the comments.
Posted by KC