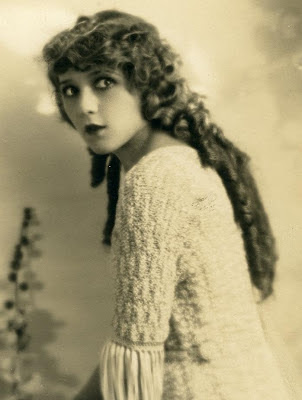 This post is by Sloan DeForest of the Mary Pickford Foundation. As the Foundation is in the process of building a new website, Sloan is temporarily homeless on the web. I'm happy to host her fantastic piece!

There’s nothing revolutionary about calling Mary Pickford the world’s first movie star. Sure, the statement is sometimes argued by sticklers who insist that Florence Lawrence – the pre-Pickford “Biograph Girl” – owns that distinction because she came first. But Lawrence never became a huge star, and her career was over and forgotten quickly. That means most of us can agree that Mary was the first big Hollywood celebrity.

But she was more than that. She not only kicked off the still-thriving practice of celebrity worship, she set a standard for movie stardom that no one has touched since. When talkies took over and public tastes changed, Mary’s star fizzled and eventually fell – and stardom itself was never the same. There have been dozens, maybe hundreds, of enormously popular movie stars since Mary left the screen in 1933, but none are in Mary’s league. She was the first, last, and only worldwide superstar of the cinema.

In Mary Pickford’s heyday, the world was populated with just under 2 billion people. True, there were no televisions, let alone DVD players, and many people in rural or undeveloped areas had never seen a motion picture. But those who had been exposed to films had most likely seen one of Mary’s.

Today, the earth has hit an estimated 7 billion people, about a third of whom are online watching YouTube clips right now. Many others have gadgets enabling them to view (and even make) movies 24 hours a day. Ironically, movies and movie stars have saturated the world, yet their fame has been diffused, spread more thinly over a larger number of stars. There are more celebrities, more avenues to achieve fame, more kinds of fame, more levels of fame; from Oscar-winning leading man to minor reality-show character to star of the blogosphere, and everything in between.

Back when Mary was the screen’s most beloved icon, her fame was concentrated. Movies were the only road to this kind of super-fame, and she was the official Queen of the medium. All the Shirley Temples, the Tom Hankses, the Madonnas and the John Waynes who would follow were embodied in a single petite woman. As journalist Kent Williams put it (in his 1998 article Mary Pickford: The First Superstar), “Tom Cruise is a freckle on a flea's butt compared to Mary Pickford in her day.” 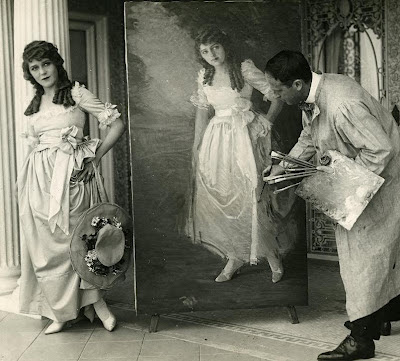 It’s difficult for us to comprehend today just how popular Little Mary was in the silent era. Adela Rogers St. Johns deemed her “the woman who was known to more people and loved by more people than any other woman that has been in all history” – and she was not exaggerating. Pickford received an astonishing 500 fan letters a day, and that was only an estimate. There were simply too many to count.

When Mary wed fellow star Douglas Fairbanks in 1920, thousands of hysterical fans from Moscow, Switzerland and Paris swarmed the newlyweds on their European honeymoon, desperate to catch a glimpse of their screen idols. Thirty-five years before Elvis Presley recorded his first single, such celebrity-crazed mobs were unheard of.

Elvis, Frank Sinatra, the Beatles and Michael Jackson all induced waves of mass hysteria at the height of their fame. But were they truly international, the way Mary was? They sang songs in English, and only performed concerts to a handful of major cities, limiting their worldwide popularity. Greta Garbo enjoyed a period of international mega-stardom, but she was more popular in Europe than in the U.S. Valentino had his moment of worldwide adulation, but, sadly, it was the moment of his death, and so it was fleeting.

But during the teens and twenties, the entire world fell in love with Mary. Between, let’s say, 1915 and 1929, many countries produced feature films, but none could touch Hollywood, U.S.A. for quantity, and very few could challenge their quality either. Because silent film had no language barriers, Hollywood shipped its films all over the globe, where they could be viewed, understood and appreciated by anyone with a projector. Once sound entered the picture, Hollywood films (in which the actors spoke English) had to be dubbed or subtitled practically everywhere else in the world, and the fun was over.

For fourteen years, though, Mary Pickford was voted the most popular woman in the world. Who else could claim so many hearts for so many years? Princess Diana’s marriage didn’t last as long. Marilyn Monroe’s entire film career did not even span fourteen years.

Monroe’s fame – as well as Chaplin’s and others – may have endured and even increased after they died, unlike Mary’s. But then, Pickford’s films were shelved and not shown for decades, until after the actress’s death in 1979. If her work had been seen by post-silent generations, who knows? The phenomenal fanaticism for Mary might have built enough momentum to burn just as brightly today as it did nearly a century ago.

And a century ago, nobody burned brighter than Mary. Today, Brad and Angelina combined don’t even come close to Mary’s fame. That level of stardom doesn’t exist anymore. It started – and ended – with Mary Pickford.