Mary Pickford Blogathon Guest Post--Team Ollie versus Team Mary: Whose Side Are You On? 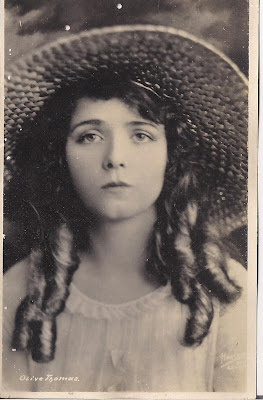 When I started researching Olive Thomas, lo these many years ago, one recurring theme kept popping up over and over again, persistent as a toothache.

In every article or chapter I read about Olive, whether it had been written in the 1920s or the 1990s, someone had to reference her in-laws the Pickfords, and how terribly they treated poor, working class Ollie.

This was a theme I began to believe myself, because it was repeated so often it became the Olive Gospel. And yet--and yet--after years of research, I began to doubt the truth of it myself.

Now, I want to make one thing quite clear from the outset. I've no doubt in my mind that the Pickfords were harsh in-laws. They were such a clannish family that any outsider wasn't entirely welcome. If Owen Moore, Doug Fairbanks, and Marilyn Miller weren't welcomed with open arms by the entire Pickford ménage, then they had good company in Olive Thomas.

And I must admit that Olive was a rather poor candidate as a daughter and sister-in-law. She exacerbated many of Jack's worst traits--his drinking and his carousing. She was a hard worker, but she also played hard, and in that matter she and Jack were in complete accord. Their fights were legendary. I can see why Mary hesitated to welcome Olive into Jack's life. She represented--and encouraged--many of the vices that Mary sought to weed out of him. 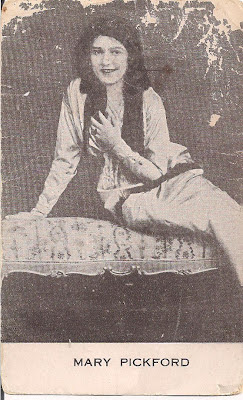 But…and here's where I depart from conventional wisdom…I don't think the Pickfords hated Olive. They were likely dismayed by their marriage, but Mary only had good things to say about Olive in her (albeit sanitized) 1950s autobiography, Sunshine and Shadows. The public had pretty much forgotten about Olive Thomas by the time the book was published; her movies sat decomposing in vaults or forgotten swimming pools; she was a mere ghost to most people. Mary could have omitted her entirely--Hollywood is known for rewriting and eliminating its history, after all. And yet, Mary included Olive in the story of her life--not as a disappointment, not as a drinker and a druggie, not as a harlot who slept her way to the top--but as a pretty and poignant butterfly who died too soon.

And, by the same token, I think Olive had high respect for Mary. She kept her marriage to Jack secret for a year, toiling away at her film career, because she didn't want to trade on the Pickford name. She respected that Mary had built up the Pickford Family, and like her, Olive wanted to make her own way in the world. And, like Mary, she began to take an active interest in the process of making films behind the scenes, absorbing the way they were made and soaking it all up like a sponge. By the time she died in 1920, she had evolved from an amateurish pretty face with a tendency to look directly into the camera, and had become an authentically good actress, capable of comedy and tragedy with equal ease and aplomb.

Many people point to Olive's grave as the final proof of Pickford-ian hatred. Olive, they say, was buried in a tiny mausoleum in a forgotten corner of Woodlawn Cemetery in the Bronx. Mary saw to it, they sneer, and then she buried Jack in her family's plot halfway across the country when he died in the 1930s.

But the fact is this: Jack did it all. His signature is on all the paperwork on file at the cemetery. He approved the designs for the mausoleum; he chose the location (which, incidentally, is in what's called Millionaires' Row, not some forgotten wayside corner); he ordered the place for his own body and put the Pickford name above the door. But when he died in the 1930s, he had been married twice more. It makes sense that his final resting place would be with his family and not with one of his three wives.

I'm not a Pickford apologist, but I do see family dynamics for what they are, even famous families from the 1920s. And what I see with Olive and Mary is not a mere rivalry, but, over time, a mutual admiration between two strong women. I'm proud to say that I am a member of both Team Mary and Team Olive.

Sarah Baker has a degree in History and Women's Studies from Southwestern University. Baker’s first project was a seven-year labor of love—a documentary film about silent film star Olive Thomas, which she wrote and produced. Over the course of her research, Baker located ten of Thomas’ 20 films, all of which had been considered lost. The resulting documentary, Olive Thomas: Everybody’s Sweetheart, executive produced by Hugh Hefner, was released to DVD (2004) along with Thomas’ film The Flapper —the first time this film had been available to the public since 1920. Baker was associate producer and researcher on A&F Productions' Gangland: Bullets Over Hollywood for Starz Encore Entertainment and Alta Loma Entertainment. In 2008, Baker again teamed with A&F Productions, serving as associate producer and researcher on the documentary study Why Be Good? Sexuality and Censorship in Early Cinema, for executive producer Hugh Hefner/Playboy Enterprises.

In 2010, Baker's dual biography Lucky Stars: Janet Gaynor and Charles Farrell was published by BearManor Media. Baker has been researching Sean Costello's life and music and working with his estate to develop Blues Man: The Life and Times of Sean Costello since his passing in 2008.