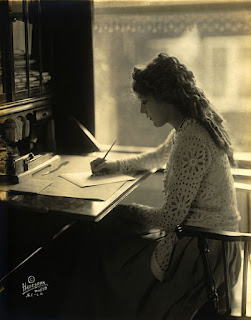 I've read a lot of Mary Pickford books over the past month, and there were a few more I read before I ever got the crazy idea to put on this shindig. These are the ones that I admire most, and which I plan to read again:

Sunshine and Shadow, by Mary Pickford

Every other Pickford book references this classic autobiography, so why not get it from the source? This is a great read, with the sort of voice that makes you feel like Mary is there telling you her stories in person. Apparently she was disappointed by some of the cuts her publisher made, and she claimed to want to share both her good and bad experiences. She does do this to a degree, though you can sense that she is holding back and even glorifying some of the grittier stories she does share. I'm guessing that was not entirely due to the publisher either. It didn't matter to me though, because I felt like I got the essence of Pickford from this book. She gives you a strong picture of her joy, frustration, sadness and gratitude, all told in a likeable voice.

The Parade's Gone By. . . and Mary Pickford Rediscovered: Rare Pictures of a Hollywood Legend, by Kevin Brownlow

Legendary film historian Kevin Brownlow's writing about Pickford is special, because he actually spoke with her. His 1960s interview with her in his silent film tribute, The Parade's Gone By. . . has been quoted so many times that I felt like I'd read it before the first time I picked up the book. He captures a tart, opinionated Pickford. It's a revealing portrait, not so much because of what she shares, but because of the way she demonstrates her view of herself, her films and the people who worked alongside her. She seems simultaneously defiantly proud and disappointed in herself. There are several other fascinating mentions of Pickford in the book, both by Brownlow and other interviewees.

I love Mary Pickford Rediscovered: Rare Pictures of a Hollywood Legend because it is lovely and deceptively substantial. The photos are a rare treat, but it is the text that truly inspired me. As far as I know, this is the only book to thoroughly examine Pickford's work, film-by-film. The plots, production history and response to all the full-length titles that received frustratingly little space in her biographies are related in great detail, with the added benefit of Brownlow's thorough research and the healthy skepticism that always drives him to dig deeper. Pickford's short films receive less attention, but her early career at studios such as Biograph is well detailed.

Pickford: The Woman Who Made Hollywood, by Eileen Whitfield

I finally had to read this book and see what the big deal was. I get it now. Whitfield has written the epic version of Pickford's life. This is primarily due to the astonishing amount of research she conducted for this very thorough biography. Not only does she get the details of Mary's life, but she places it all in the context of the times in which she lived. The result is a rich history of movies, culture and society, in addition to a beautifully written tribute.

I have to admit I went into Peggy's book wondering what on earth she could possibly have to add to Mary's story, but this book was almost literally impossible to put down once I started reading. The writing flows beautifully. Leavey tells Pickford's story with rich detail and strong clarity. I would recommend this version of Mary's life to anyone who is new to Pickford or classic movies.

It was eerie reading this fictional re-telling of Mary's early life, as seen through her mother Charlotte's eyes, right after finishing Sunshine and Shadows. I've mentioned this comparison before, and it is a perfect way to describe the book: it was like the biopic version of her autobiographical "documentary." Menefee researched the book thoroughly, determined to get the details right, but then he opened up the story with dialogue and drama in the most amusing way. You'll all get a chance to win a signed copy of this book during the blogathon! More details to follow.

The only book I didn't get to, but that I really wanted to read was Scott Eyman's Pickford biography, which seems to be held in high esteem. I'd love to hear from any of you who have read it.

Are there any other Mary Pickford books and resources that you like? Please share your favorites in the comments.