Book Review: A Son of Hollywood Writes About His Childhood 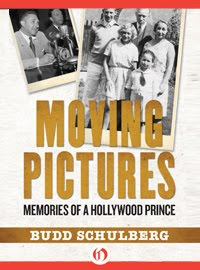 Several years ago, I ran across a copy of Moving Pictures in a London book shop. Though I had once enjoyed reading a library copy and wanted one of my own, I thought about my suitcase full of books and decided it was one book too many to lug back to the states.

Oh how I regretted that decision! This brilliant Hollywood memoir is a classic of the genre. For that reason, I was delighted to review a new eBook edition, which is one of eight Schulberg titles re-released by Open Road Integrated Media this year. It is the story of Budd Schulberg, the oldest son of B.P. Schulberg, an unsung pioneer of the studio system. Young Schulberg's papa discovered Clara Bow, developed the idea for United Artists (but was edged out of his chance to be a part of the studio) and served as head of production at Paramount.

Moving Pictures is basically several books behind one cover. It's a memoir of a wealthy, but awkward son of Hollywood, a budding writer and of a growing movie industry. Schulberg manages to weave all of these elements together so that tales of his severe stuttering problem fit in neatly with stories about his long chat sessions with Bow in the backseat of her fancy car. In another incident where ordinary events become extraordinary, B.P. has a long time affair with actress Sylvia Sydney, which horrifies his highly moral son. Budd's struggles to reunite his parents will resonate with anyone who has experienced divorcing parents, but watching his father's mistress onscreen and angrily anticipating the scene where she dies is surely a rare experience.

Glamour and wealth surrounded this anxious, but ambitious young man every day, and Schulberg dutifully reports on those things, but he was most fascinated by things in his childhood world, like boxing and his colony of homing pigeons. He knows the Hollywood stories appeal to the masses, but that the glitter often hides despair, treachery and disappointment. Though I was sometimes impatient to get back to the movie stories, I did enjoy reading about his many passions, because he communicated so poignantly how much they meant to him.

The book takes a while to get moving. I actually had the same experience this time as I did when I read it years ago: I couldn't get engaged with the New York phase of Schulberg's story or his early Hollywood days, but once his dad started staying out late to party, it got interesting. I still haven't been able to decide if it's the content or the storytelling that improves at that point, but when young Budd watches his dad go into a crazy party after a boxing match, while the chauffeur waits to take him home to his mother, things go from 'eh' to interesting. My only theory is that it is because at that point, young Schulberg is starting to see the grown up world around him with greater clarity and the details come out in his writing.

Moving Pictures ends with Budd heading off to college, ready to grow up and make his own way in the world. Schulberg more than fulfilled his writing ambitions, making his name as a screenwriter, novelist and journalist. He also found success in Hollywood, like his father, but in his own way. Budd drew upon his Hollywood experiences to write What Makes Sammy Run? which Bette Davis once claimed to be the only book to accurately capture the brutal studio culture. He wrote The Harder They Fall and the Academy Award-winning On the Waterfront as well. Schulberg also became infamous for naming names to the House Un-American Activities Campaign, an act which stuck with him to his obituary.

Though this is a memoir of beginnings, from Schulberg's childhood to the birth of the studios, in the end there's enough detail and excitement in its pages for a lifetime.

Thank you to Open Road Integrated Media for providing a review copy of the book.