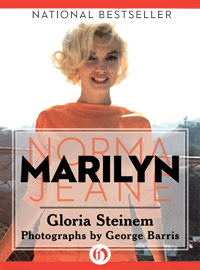 …Monroe's personal and intimate ability to inhabit our fantasies has gone right on. As I write this, she is still better known than most living movie stars, most world leaders, and most television personalities. The surprise is that she rarely has been taken seriously enough to ask why that is so. -Gloria Steinem

It is no longer bold to claim that that Marilyn Monroe had intelligence, talent and sensitivity. The perception of her as a sex joke is now old-fashioned, so much so that it is almost difficult to believe that so many in her time refused to take her seriously.

Though it is in no way definitive, Gloria Steinem's classic 1988 biography of Marilyn Monroe, now available in this electronic edition, played an influential role in that changed public perception of the troubled actress. After many men had taken a shot at writing about her, here was a sensible feminist thinking through Monroe's life from the viewpoint of a sympathetic woman. She dug into her past to find the reasons for her behavior and the childlike sexpot image she created. Suddenly, the troubled goddess was human.

It wasn't always that way. As a teenager, Steinem slunk out of a screening of Gentlemen Prefer Blondes (1953), embarrassed by the cooing gold digger she saw on the screen. Appreciation of her comedic and dramatic talent took time, as she came to view Monroe's persona as an act of survival in a man's world.

Steinem gave Monroe credit for her intelligence, determination and compassion. She acknowledged that it was a miracle she had the strength she did, given the way her childhood permanently damaged her sense of security, self worth and ability to make lasting connections with others. Maybe Monroe was doomed from the start, but her brilliance gave her the will to change the world, and that is one of Steinem's key points.

Marilyn is more about Monroe the person. Very little attention is given to her film career. You could almost call this a character study instead of a biography. Steinem pokes around the details of her life, revealing the sadness of her lonely childhood and the tawdry events of the starlet years. It isn't a happy story, but you get a sense of Monroe's passion for learning and amazingly modern world view, which seems to indicate she felt some tenderness and joy.

The foundation of the book is an project that was abandoned upon Monroe's death. Shortly before her passing, she had been collaborating with George Barris on a series of portraits and intimate interviews. Recently fired by her studio, she planned to use the project to prove her worth and find work again in the industry that meant so much to her. Years later, it was Steinem's words instead that accompanied the photos.

The Marilyn in Barris' photos is typically charismatic and at ease with the camera. It's astounding how she could reach out through a image and make you feel the force of her personality. I can't think of anyone else who has been able to match that quality.

I viewed the book on a laptop, and I found that some of the photos were a bit blurry and pixelated. Understanding the limitations of the original format, I didn't find that too distracting, or bothersome, but it was noticeable. I imagine they would look sharper on a smaller screen, as with a reader.

This is a classic book, and I'm excited to see it in print again. I love how OpenRoad Media has brought this and other important movie books back into circulation. Here's hoping they'll continue to dig up gems like these from the past.


Deepest thanks to OpenRoad Media for providing a review copy of the book.