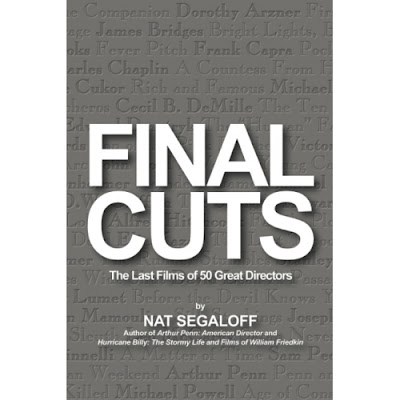 Unlike their counterparts on the silver screen, real Hollywood stories often end badly. And so it follows that there are a lot of unhappy endings in Final Cuts, which covers the production history and response to the last films of some of the best directors in Hollywood history.

Some of these tragic tales have become legendary. What devoted classic film fan doesn't know how Orson Welles struggled to the end of his career? Others are of directors who, despite hugely successful careers, have not been celebrated themselves. (Look up Donald Siegel or Peter Yates. You probably love at least one of their films.)

Segaloff writes in the tone of a guy who has seen it all, and that's because he has. A variety of careers, including stints as a publicist and a journalist, gave him access to many of his subjects. This firsthand information brings a fresh perspective to what could otherwise be a depressing slog through one dying career after another.

Fortunately there are triumphs to go with the losses. Most of profiles have enough biographical history to give you a generally positive big picture, so that the almost inevitable decline of the subject has less edge. Even though it is devastating to hear how Vincent Minnelli failed to fulfill his vision when directing his daughter Liza in his last film, you also have the reminder that he was one of MGM's top directors.

That is not to say there weren't any happy endings. Some directors beat the odds and kept their spark until the end. John Huston directed a string of stinkers in the 80s, but he finished his career directing his daughter Anjelica in The Dead (1987), one of his most admired films. Robert Altman also ended on the upswing, with the laidback, but well-executed A Prairie Home Companion (2006).

It is sad that these successful swan songs were the exception in the collection, but overall it was fascinating to read how so many aging directors were determined to keep working, sometimes for the money, often to continue to pursue their cinematic visions. Some were able to change with the times, and maintain a fresh style. Others, like Billy Wilder, were hurt to realize they had fallen out of touch with their audience. I can imagine how painful that could be when you have spent so much of your life working for the approval of your public.

Segaloff earns his reader's trust with solid journalistic fact-checking. He tells the legend, and then says what he really thinks happened based on his own research, or even an interview he conducted himself. That insider knowledge keeps these 50 stories lively, informative and addictive.

Deepest thanks to Bear Manor Media for providing a review copy of the book.