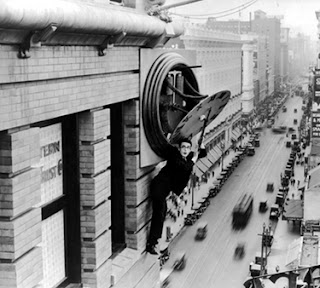 I'm so glad I waited to see Safety Last! (1923) on the silver screen at Seattle International Film Festival 2013. It had always been on my list of movies to see, and I'm not sure why I hadn't checked it out yet, but when I found out this new Janus restoration released by Sony was touring, I knew that had to be the first time I saw Harold Lloyd's most famous film. It was amazing to see this great comedy in a print so clear and sharp I had to keep reminding myself that the action I watched was filmed nearly 90 years ago.

I was delighted to see that SIFF was categorizing Safety Last! as a family film, because upon hearing it was playing the festival, I decided I had to take my five-year-old to check it out. She's been digging Keaton, the Marx Brothers and Laurel & Hardy lately, so I figured it was time to introduce her to the young man with glasses.

When I go to the movies, I usually sit in the top middle of the theater. I've always felt like being to close to the screen was overwhelming. Well, my daughter insisted on sitting closer, front row. She could not understand why I wanted to be so far from the big TV (yeah, I don't take her to enough movies).

So fourth row was the compromise. And I stand corrected. It's better to be close, because you can focus on the movie. If you're in the back row, you focus on the people in the audience too, and people in movie theaters usually drive me crazy. This is why you have kids. Once you get past the wanting ice cream for breakfast thing, they are so practical.

The program started with the 1917 short Bliss, costarring Bebe Daniels. This is one of my favorite Lloyd shorts, because it is the perfect example of how he in his onscreen persona was not only enthusiastic and determined, but a huge opportunist. The whole thing is basically Lloyd taking advantage of one situation after another, without a breath of air in between, until he gets a wedding ring on his girl's finger. It's the best, but I felt so cranky watching it, because the print in circulation is so bad you can barely see what's going on. It made me realize how spoiled I have become by all these amazing restorations in the fast few years. Archivists are truly heroic people.

It was astonishing to see the difference in quality between Bliss and Safety Last! There were only six years between these films, but the new print made the latter seem so much more modern and fresh. I think restoration brings more people to classic films, because it not only makes them more accessible, but we realize that the people we're seeing on the screen are really not much different from us when we don't have the dinginess of a shabby print to remind us of its age.

Safety Last! definitely has a bright, modern flair. It takes Lloyd's eager young man to the city, where he toils behind the fabric counter at a department store to make enough money to marry his girl. She waits in their hometown, hopeful, and Lloyd tries to keep her spirits high by sending expensive gifts that he can't afford. In fact, he's starving. Thinking he must ready for her, his girl goes to surprise him at work in the city, and if things haven't been silly before, they get outrageously goofy going forward.

The most famous part of the movie is that shot of Lloyd hanging from the face of a clock at the top of a tall building. This is part of a climb our eager young man makes up the side of the department store in an effort to bring attention to his employers and make a big bonus for himself. He hadn't planned to make the climb himself, but this is comedy, so he does.

My daughter was stressed out during the long climbing scene, which is both hilarious and gut clenching. I had to remind her that in a comedy, the guy doesn't end up splattered on the pavement. At least before they got a bit more black, but I'll save that for later.

This was a great family film. There were a lot of little people in the theater, and except for a few questions here and there the only noise in the theater was laughter. I don't think I heard many kids laughing, but they were definitely attentive and very curious about what was going on. It was wonderful to see that.

If you've get a chance to see this new restoration, grab it. I hear this is just the start of Sony's Harold Lloyd revival. It's about time this timeless comedian enjoyed a widespread rediscovery.

Check out the rest of the great classic films coming up at SIFF 2013.
Posted by KC