Book Review--Musicals on the Silver Screen: A Guide to the Must-See Movie Musicals 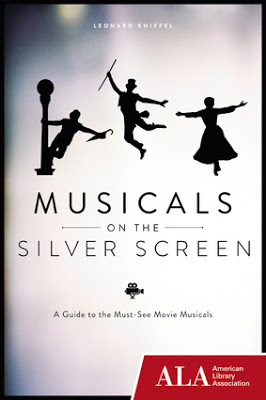 Musicals on the Silver Screen packs a lot of information about movies into its 160 pages, and it shares its treasures in a lively, entertaining way. It's spinach that tastes like cotton candy. Now I want all my film reference books to be fun

The format of the book is straightforward: short blurbs about musicals arranged chronologically and with a section for each decade. The length of these entries vary, from a few sentences to half a page, depending on the significance of the musical or the interest of the author. Sometimes I craved more information, but usually the length fit the worthiness of the film. There are also little symbols indicating which titles are biography, animated and included in the National Film Registry. My Virgo heart did a little squee when I saw the check boxes by each entry for films already seen.

While your can pick and choose among entries, I found it most interesting to read Musicals cover-to-cover. Experienced this way, it reads like a history of film musicals, rather than an unconnected series of thoughts. Kniffle occasionally refers to previous entries and he always strives to put each movie in historical context. Sometimes I found that effort excessive. I didn't feel the need to know about every unfortunate racial reference, and I would think anyone watching a classic film would expect these moments. Still, I could see how that might help someone new to classics to ease into that world.

Musicals is a particularly good book for those with little knowledge of classic film. I would have loved this when I was first discovering Busby Berkeley movies on TV as a kid. While I had heard of most of the titles, I did pick up some new viewing suggestions. I also enjoyed the interesting movie history tidbits scattered throughout the book. How did it take me so long to learn why it is called the silver screen?

The book has a strong dose of Kniffle's personal opinions, which I enjoyed. I'm sure that's why I found it such an smooth, entertaining read. I felt like I was being given a whirlwind tour by an animated guide. Making a reference book from a single perspective like that can be tricky, but I think there are enough straight facts here to satisfy those who may not appreciate the extra commentary.

Whether as a concise reference or a fun read, I recommend Musicals on the Silver Screen to anyone curious about the genre.

Many thanks to Huron Street Press for providing a review copy of the book.