My Movie Book Library: 500 Great Films, Where It All Began 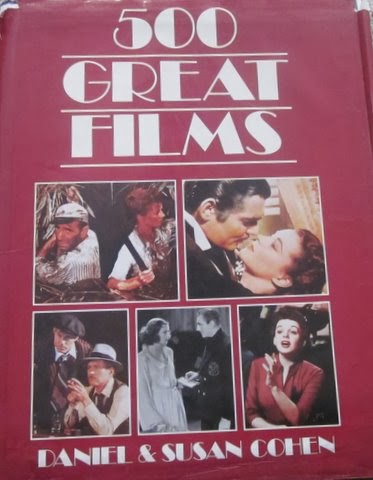 It isn't too dramatic to say that 500 Great Films changed my life. Classic Movies would not have existed if this book had not awakened me to the nearly unfathomable variety and wonder to be found in the movies. I wouldn't have developed this deep love for film which, besides being deeply satisfying on its own, has opened up so much of the rest of the world to me.

My parents gave me the book for Christmas, when I was first starting to get interested in classic movies. It immediately became my textbook for learning about film.

The book has a straightforward format: each entry includes the title, release date, director and a paragraph or two about the movie. There are also lots of photos, enough to give it that glossy, coffee table look.

What I love about 500 Great Films is that it includes movies from so many eras, genres and countries. There's everything from art films to popcorn flicks and it all fits together so well. In their introduction, authors Daniel and Susan Cohen emphasize that while they have tried to be somewhat objective, they have compiled a very personal list. If that is the case, then these two have remarkable taste.

After watching, and loving, several of the movies in the book, I decided I had to see all of them. To keep track of what I saw, I bought a roll of metallic silver star stickers, and each time I watched a movie, I put a star next to the title.


Now the book is filled with stars. It thrills me to see them every time I flip through it. Though I've probably forgotten at least a third of the movies because I've watched them over several years, I still remember so many of the wonderful things I have seen and how I felt seeing them for the first time. Once I watch all of them, I may need to start all over again.

For a while my goal was to see all 500 movies by the time I turned 30. Without getting too detailed about the specifics, I will admit that I missed that deadline. At some point, I realized that racing to see all those movies would take away from the joy of seeing them. I still haven’t seen 80 of the films, and I'm planning to take my time watching them.

Authors Daniel and Susan Cohen are a husband and wife team. I always had them in my mind as these cozy film nerds who lived for the cinema, but their work is much more diverse than that. Daniel has written over 100 books, most of them about other subjects, including paranormal phenomena and lots of titles for children. Susan eventually began to help her husband when his workload became overwhelming.

I was saddened to learn that the couple is probably best known for co-authoring Pam Am 103: The Bombing, The Betrayals, and a Bereaved Family's Search for Justice, which is about the tragic 1988 death of their daughter Theodora in an airplane terrorist bombing (one year after 500 Great Films was published). They have also been advocates for the victims in the press, speaking out against the release of the bomber in 2009. Hearing about that was like learning about something awful happening to a friend. I can't imagine how it must feel to go through something like that.

So my vision of the cozy film nerds has been altered, but it hasn't changed the way I view 500 Great Films. I have absorbed every page of that book, the layout is more familiar to me than any other. This book one of the best things that has ever happened to me. I'm so grateful to my parents for supporting and encouraging my interest in the movies.

Email ThisBlogThis!Share to TwitterShare to FacebookShare to Pinterest
Labels: My Movie Book Library