The opening number for the 1989 Academy Awards has got to be one of the most, if not the most notorious in the ceremony's history. Lovely 22-year-old actress Eileen Bowman played Snow White in a production that required her to squeak out her lines in a high-pitched voice, flounce through a cringing audience of celebrities and sing inane lyrics to the tune of Proud Mary with Rob Lowe. Bless her for having a sense of humor about it all (what courage to get through a number you suddenly realize is bombing in front of millions of people. I admire her so much. I'm glad she ended up being a success on the stage in San Diego.)It's these things, not to mention the delightfully gaudy dancing (literal) stars and shoulder-shaking couples shimmying in evening wear, that I've always remembered.

I came upon a clip of the number in this recent Guardian article and thought watching the whole thing would be the perfect way to procrastinate until I thought of something better to do.

Imagine my surprise when a few minutes into the clip (about 3:17 if you'd rather miss the rest) Merv Griffin pops up with a mike and starts introducing loads of classic movie stars. I had totally forgotten about that. They don't really do anything expect look fabulous and maybe break into a couple of dance steps, but how wonderful to see Buddy Rogers, Alice Faye, Tony Martin, Cyd Charisse(she does the most, busting out her characteristically slinky moves), Dorothy Lamour, Roy Rogers, Dale Evans, Vincent Price and Coral Browne. It choked me up to see all of them together like that, near the end of their lives, but looking wonderful.

Then Rob Lowe enters and the most genuinely touching moment of the production is forgotten.

We'll never see those stars again, so I can only hope that they'll at least bring back the dancing stars: 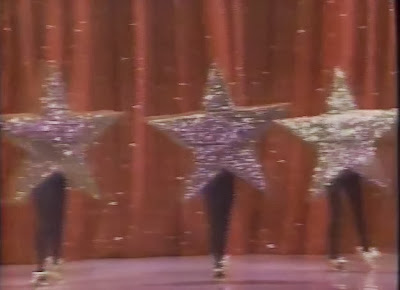 As a consolation, that wouldn't be too bad.