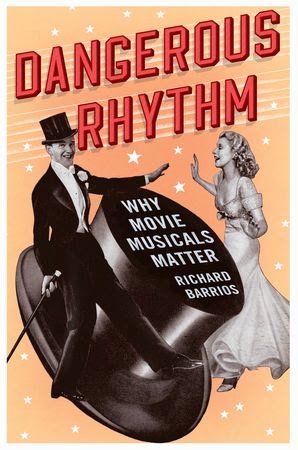 Movie musicals have been responsible for some of the most memorable moments captured on film, but the genre has never had a smooth ride. You could never expect them to have a steady presence like comedies, horror or dramas. They almost seem too fragile, easily killed by changing times or too-grand productions, and yet they keep returning to theaters, with varying levels of success.

In his new book, Richard Barrios covers the history of movie musicals, roughly from 1929 to the present, with humor, passion and a firm understanding of the genre. He throws in his own analysis, which is fascinating because of his own depth of knowledge. While Barrios is serious about the facts, he keeps the tone light, because he's well aware of how absurd music on film can be.

With a funny, but not jokey tone, Barrios digs into famous titles, attempting to find the true worth of these films beyond awards, critical reception and box office. Why does a mega production like Evita(1996) ring false, while Chicago (2002) manages to strike the right chord? Why is it so often difficult to translate a Broadway success to the big screen? While I had already answered a lot of questions like these for myself, I felt like Barrios tapped into a lot of issues with these films that I always sensed, but was not able to put into words.

Dangerous Rhythm works partly because Barrios is able to judge films fairly according to their vintage. He gives proper praise to movies that have not aged well, but were important in their time. Those works that have endured get deeper analysis, which I occasionally found tiresome, but I was surprised to find that there was so much more to be said about classics like The Sound of Music (1965) and The Wizard of Oz (1939). I also loved that Barrios gave almost as much attention to the bad films as the good. He seems to understand that sometimes there is nothing so fascinating as a huge misstep.

Several of the key elements of movie musicals get a spotlight, from larger subjects such as dance in film and musical cartoons, to the treatment of homosexuality and race. These are all approached critically, but with compassion for the performers (though I was sad to see the bizarrely-talented Stepin Fechit once again given the brush-off).

The beloved stars of the genre also get lots of attention and this is where Barrios really gets it right. He crowns Fred Astaire the king of the genre and gives a compelling argument for his choice. I also liked his concise, but spot-on descriptions of musical performers. Of Esther Williams he writes, "She was a big and pretty and amiable young woman, healthy as all get-out." That pretty much sums up at least her superficial appeal for me.

Dangerous Rhythm covers an extensive history, with lots of background and fascinating tidbits, but it reads like an upbeat monologue. Its academic elements float along, buoyed by Barrios' humor and lively passion for his subject. It was fun to read, but I finished the book with so many notes about new things to explore that it was as if I'd just taken a film history course.

Nobody needed to tell me why musicals matter, but I now I have a renewed interest in the genre and lots of ideas to consider.

Deepest thanks to Oxford University Press for providing a copy of the book for review.
Posted by KC