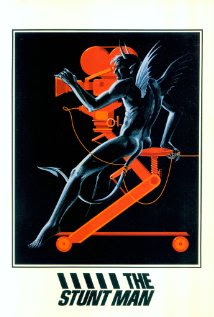 The house was packed for The Stunt Man (1980), something I've rarely seen for an archival presentation at SIFF. This was a fanatical audience, and the prospect of seeing Richard Rush, the director of this unusual, clever film seemed to increase the excitement.

Rush came out for a brief chat with SIFF artistic director Carl Spence before the film began. It was hard to believe this hip, spry man wearing shades and rocking a Giorgio Morodor mustache was 85-years-old. I liked the way he prepared the audience for the film, telling us that we tend to live life peeking through a keyhole, with a limited view. Because of that narrow perspective, we invent things: enemies, rules, gods. He finished saying, "this seems to be the substance from which this picture is cut." After that introduction, I could hardly wait for the interview with Rush after the film. Fortunately I was also very excited to see the movie.

In the first scene of the film, the grain was heavy to the point of being distracting, but eventually it lightened up enough to fade into the background as it should. Film restoration is definitely not Peter O'Toole's friend. In his first appearance his eyes are red and bloodshot; he looks like he's been on a bender, which he probably had. Still, while hard living was beginning to catch up with him, I don't think I've ever found O'Toole more alluring. He looks a bit like your favorite aunt, slouching around in a belted tunic and a long gold necklace (clothing that was reportedly based on Rush's style), but I've never found him more sexy. It certainly helped that Rush filmed him like a god, often placing the camera below the actor so the audience can gaze up at him.

O'Toole is Eli Cross, a talented, controlling and vaguely frightening film director who is on location at a beachside hotel to make a World War I movie. When a car plunge off a bridge kills his stuntman (played by Michael Railsbeck, brother of star Steve) he quickly employees Vietnam vet Cameron (Steve Railsbeck) to replace him. Never mind that he is wearing broken handcuffs for bracelets. After all, that makes him easier to control.

Almost right away, Cameron suspects his director has little regard for his safety and may even wish to kill him with a dangerous stunt. Even being pursued by police (for a crime that is revealed in one of the movie's funniest and most bizarre scenes) does not persuade him to stay. Watching the film's glowing star Nina (Barbara Hershey) within the frame of a door window does something to him though. He is mesmerized by her performance. He decides to stay.

That kind of framing is one of my favorite aspects of The Stunt Man. Whether or not the camera is rolling, the actors are often captured in frames of some kind, reflected in windows, always performing  and projecting images, while reality becomes increasingly more difficult to grasp. Though Cameron senses he is in danger, the truth constantly shifts before him, until he cannot be sure of anything. It's all in the staging, which is just another way of talking about perspective.

It's easy to see why so many filmmakers, from Bergman and Truffaut to Antonioni and Spielberg, adore this film. The Stunt Man treats the craft with reverence while it simultaneously rips it to shreds. I kept thinking about what Rush said before the screening though: film is the perfect way to move beyond our limited views and the fear we feel of the truth beyond them.

I've always loved this film because of the way it overflows with these ideas while entertaining on the most basic level. It's got action, comedy, mystery and romance, but it all serves a great concept. I can see why Rush didn't get many breaks as a commercial filmmaker. He's capable of taking big, messy ideas and turning them into something intense, disorienting and impossible to categorize. Scary stuff for a studio.

After the film I got another treat, Rush was interviewed by William Arnold, a retired local film critic whose reviews I read in the Seattle PI for years. He also wrote a fantastic book about Frances Farmer called Shadowland.

It turns out Arnold played a huge role in launching The Stunt Man to the public. He was an early fan of the film, writing a review so glowing that Rush said was, "as if my one mother had written it." His support helped to fill three screenings of the film, encouraging the studio to give it a chance in a wider market. Eventually, the film would play to an enthusiastic crowd at SIFF, 35 years ago.

Arnold reminisced about the Seattle premiere of the movie. He paced the lobby of the theater as if it were his own film, anxious that the audience would embrace it. An enduring fan of Rush's achievement, he said, "to me it's a perfect movie."

I loved what Rush had to say about the production of The Stunt Man and his feelings about film. Remembering O'Toole and the overall experience of filming he said he had " the best actor in the world, playing the best role [he'd] ever written." He called making the movie, "the outer limits." In reference to the anti-war commentary via Railsbeck's veteran character, Rush said, "I believe that movies that are about something are more entertaining." That made me wish so much that he'd had the opportunity to make more films the way he believed they should be made, and all the more grateful that he'd had the chance to make this one.
Posted by KC