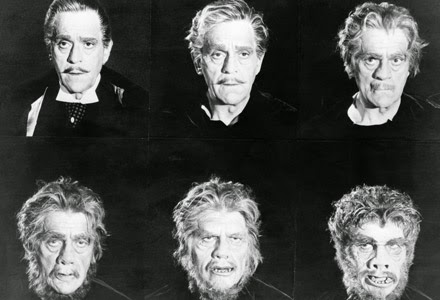 I was delighted to end SIFF 2014 with a movie that combined two of my favorite things: classic movie stars and experimental film. Austrian filmmaker Norbert Pfaffenbichler's ode to the madness of Boris Karloff is one of my favorite films from this year's festival. I was so mesmerized that I sat forward in my seat the entire hour and twenty minute running time.

The concept of the film is simple, though it is then developed into more complex extremes. Pfaffenbichler has edited together dozens, if not hundreds of shots from Boris Karloff movies. This means that Karloff will often have a conversation with Karloff. Sometimes one of them in color, the other in black and white. Other times with the actor in drag and a bright orange wig or as an animated puppet. His entire career, from the silent days to the age of television is covered.

These images dance around each other in different ways. Sometimes it looks like Karloff is chasing himself through a dreary castle. In other cases, he is more relaxed, engaging himself in a game of chess with a slightly sinister edge. He attacks himself, laughs at himself and occasionally he talks to someone else off screen, though you are by then so used to seeing him interacting with himself that you assume he's talking to Karloff.

Though you'll only see the briefest glimpse of other humans, A Masque of Madness is full of animals, most of them wild, pulsing with deadly energy. They all seem to be after Karloff, with the exception of a mellow cat purring on his lap.

In line with his many mad scientist roles, there's also plenty of flashing machinery and gurgling lab equipment. In one scene, different cuts of buzzing, beeping equipment are blended together in such a way that it sounds like a musical number.

The movie is divided into sections, each of them with different titles, though all are cheekily labeled "Chapter 1." While all of these chapters make wild detours and unpredictable turns, they do have a certain structure to them. Certain sections amplify the horror of Karloff and his quiet menace. Others show how vulnerable he could be. It's fascinating, because in his own words, but without his own participation, the actor shares his persona in a new, fresh and revealing way.

Though I love experimental film, this is only the second time I've had the opportunity to watching one in a theater (the first was a program of Quay Brothers shorts that I still think about ten years later). Much like silent movies, I prefer the immersive experience of the theater while watching this genre.

The Masque of Madness was like Joseph Cornell's Rose Hobart (1936) gone mad. Though many people were already at the closing night festivities, the small audience in the theater was spellbound and I think in its own devious way, it was a hit. It was a dark, mysterious and surprisingly charming way to say goodbye to SIFF. I cannot wait to see what this amazing programming staff comes up with for SIFF 2015.