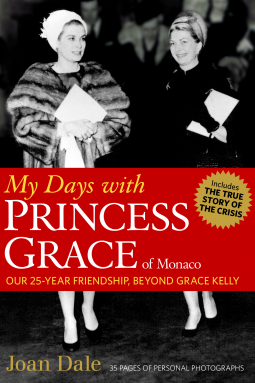 My Days With Princess Grace of Monaco: Our 25-Year Friendship, Beyond Grace Kelly
Joan Dale (with Grace Dale)
In-Lightning, 2014

Since she first arrived on the shores of Monaco, her face partially obscured by a domed white hat, there have been rumors and speculation about Princess Grace of Monaco. Though her life would be even more public as a royal than as Grace Kelly, movie star, she was in many ways unknowable. The freshness of her beauty and the regal bearing that made her seem born to palace life fascinated her subjects and drew visitors from around the world, but out of duty, and a personal need for privacy, she would only share so much of herself with the world.

In My Days With Princess Grace of Monaco, much as with Grace, Howell Conant's book of intimate photos, you get a glimpse of the real woman. Using correspondence, journal entries and her own unforgettable memories, long time friend Joan Dale shares her memories of the times she spent with the princess in Monaco and around the world. She reveals a Grace who dazzles with her personality as much as her beauty. A kind, generous soul who values service to those in need, simple pleasures and above all, family life.

The book reads like a journal, with all the repetitive tedium and fascinating details to be expected from daily documentation. Dale met Grace when both women were in their twenties, while her husband Martin was in Monaco on diplomatic duties. The two were lonely in the tiny principality, both far away from home and missing family and friends. They formed a close friendship.

My Days With Grace follows these women and their families as they navigate busy, stressful lives. At first it all seems so superficial, as Dale describes glamorous galas, month-long vacations in the mountains and princely games of golf. There are only so many times it is interesting to hear about the wealthy elite noshing on caviar and salmon while displaying diamonds the size of quail eggs. To top it off, the young diplomat's wife raves on and on about how Grace and Rainier like her and husband Martin, as if she is in the throes of a passionate love affair.

Dale has heart though. She was clearly a loyal friend to the royal family when they could trust few others, and Grace above all. The women had a remarkably warm relationship, which undoubtedly had much to do with the refuge they offered each other throughout their tumultuous lives. The friendship actually was as profound as a love affair, if deeply platonic.

It is common knowledge that life as a royal in the public eye can be a strain, but Dale draws on her firsthand experience with the family to show just how living with that level of attention felt. She reminds readers that only Grace chose a life in the public. Her husband Prince Rainier and children Prince Albert and Princesses Carolyn and Stephanie did not have a choice.

Dale shares stories of the years she spent with the royal family, raising her children alongside Grace. Her two sons often played at the palace, in addition to sharing lessons, birthday parties and vacations. It was interesting to read about daily life at the palace and how Grace brought warmth to her role as a Monegasque royal.

The book is also a deeply loving tribute to the Princess, who comes off as almost too good to be true. Dale shares stories of Grace's generosity and unpretentious manner. She worked much harder than necessary to improve the lives of her subjects, endearing them to her as they criticized her American ways. She was also a devoted mother, cultivating strong relationships with all three of her children despite the intensity of her schedule. At least in the early years of marriage, she was also a happy wife. It was fun to read about the playful relationship Grace enjoyed with her Prince.

Though Dale never claims that the princess was perfect, she nearly comes off that way. The stories ring true too, dovetailing nicely with what has been known about Grace publicly. Mrs. Dale is loyal to her friend, allowing her some privacy, while alluding to troubles in her life and marriage to give as full a picture of their lives as possible. It's a nice balancing act.

Dale also writes in detail about the notorious push by French President Charles de Gaulle to overtake Monaco in the early sixties. For the most part, she sticks to her point of view, though she also speculates about the motives of the French and is not entirely unsympathetic to their perspective. Not knowing very much about this story (which was the focus of the supposedly highly-fictionalized Grace of Monaco [2014]), I wondered who was truly in the right, though it seems there was a great deal of bullying from the French government.

In one of the most touching passages of the book, Dale shares her extensive journal entries from a month-long cruise she took with the royal family not long before Grace's untimely death in a car accident. It was fascinating, if bittersweet, to read about the Princess' last family vacation, and comforting to know they had a final opportunity to bond before tragedy struck.

It struck the family hard too. Rainier and the children never got over her death and neither did Joan Dale. She died not long after Rainier in 2005, feeling that the world she loved had faded away.

Dale is a participant in history, not a writer. Her memoirs are based on letters and journals, and as she died before its publication, she was not able to participate in final preparations for the book. For these reasons, the narrative can lack flow. There's lots of repetition and often memories get jumbled together without any logical progression.

It can make for rough reading at times, but this is a fantastic story, and well worth seeing through to the end. Dale's daughter Grace worked with her mother on an early draft of the book years before she passed and she has done well completing the project without her. There are also several pages of amazing intimate shots of the Dales and the royal family together. The book would be worth a look just to get a glimpse of these alone.

I enjoyed this touching, revealing memoir of a remarkable woman and those who were enraptured by her remarkable personality and great beauty.

Many thanks to In-Lightning for providing a copy of the book for review.