Book Review--Tinseltown: Murder, Morphine and Madness at the Dawn of Hollywood 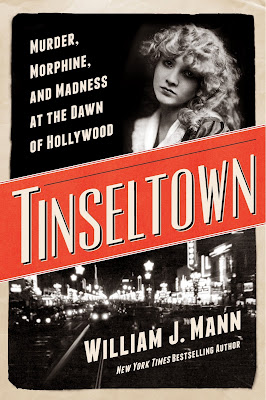 I love this book. It reads like a novel, but everything, from the words spoken to the color of the wallpaper is true. Just check the thirty pages of tidily referenced notes at the end of the book.

When Tinseltown arrived on my doorstep, I was a bit wary. I loved that it covered the Hollywood scandals of the 1920s, and particularly the mysterious murder of director William Desmond Taylor. I'd always wanted to more about what happened, or at least what was believed to have happened. But a novelization?

I feared cheesy dialogue, and narrative that took truth off the rails into fiction no more intriguing than reality. I've been there, and those books are painful to read. Fortunately Mann puts his readers at ease right away with a preamble, in which he explains that while the book is in narrative style, the facts are as solid as in a reference book.

It turns out this style is an excellent way to work through all the details of Taylor's case. It's full of fascinating characters: friends, admirers and enemies. These personalities are brought to life in satisfying detail, truly as if they are characters in a book. Their stories run away and towards each other, intertwining, then separating, but always somehow easy to follow.

The narrative revolves around three actresses who were significant in Taylor's life: his best friend Mabel Normand, the young Mary Miles Minter, who suffered an unrequited love for the director, and Margaret "Gibby" Gibson a small time film actress with whom he was briefly acquainted.

These women drive the story, their lives serving as a way to understand who Taylor was, what Hollywood was like in those days and ultimately, who killed the director. In fact, that's one of the most intriguing things about the book: Mann makes a very convincing argument as to the identity of the murderer.

While Tinseltown can be enjoyed as a murder mystery, it also provides an interesting history of some of the most influential players in early Hollywood. I've never been so fascinated to learn about movie moguls like Adolph Zukor and Marcus Loew.

Even more surprising was the sympathetic way William Hays was portrayed. While I hadn't exactly seen the guy as a villain, I always thought of him as the guy who help take a lot of the fun out of the movies. I now have a lot more respect for what he was trying to do as the first president of the Motion Picture Producers and Distributors of America.

I was especially touched by the way Normand and Taylor's friendship was portrayed. The two were kindred spirits. They bonded over their love of books and spent long evenings talking about literature, work and their lives. You get a sense of the loss the actress felt when her friend was taken away from her so suddenly.

It was also interesting to get a peek at the life of an actress who didn't do so well in Hollywood. Margaret Gibson never came close to the fame Normand and Minter knew, though she eventually went to illegal means in her quest for stardom, and ran with some rough company who did their own damage to the industry. She managed sleazy notoriety instead, which was damaging enough to her career to require a professional name change.

As with Gibson's story, the other scandals in the book all seem to affect the Taylor case in some way, whether directly or by their general influence on the movie industry. There's the notorious Fatty Arbuckle murder trials, a scandalous night several movie bigwigs spend in a bordello, Normand's struggle with drugs and Wallace Reid's tragic death from his own addiction. There's so much detail to take in that it might have been difficult to wade through it all if it hadn't been told in narrative style.

While Mann's diligent detective work is admirable, it is the smooth construction of the book that makes it work. He writes beautifully, with a good sense for mood, suspense and the emotions of his real-life characters. I'd love to see his take on other classic Hollywood stories.

Many thanks to HarperCollins publishers for providing a copy of the book for review.