Book Review--Scandals of Classic Hollywood: Sex, Deviance, and Drama from the Golden Age of American Cinema 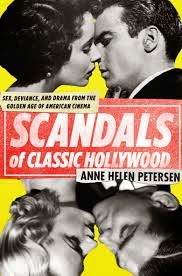 Scandals of Classic Hollywood is not as scandalous as the sensational cover would have you believe, but it succeeds in its own way. Instead of titillating with the sex and deviance promised in the title, this is essentially a thoughtful examination of tinsel town celebrity from the 1920s to the end of the studio system in the 1950s.

Based on Buzzfeed writer and former professor Anne Helen Petersen's beloved Scandals of Classic Hollywood series on Hairpin.com, it draws on some of the information covered on the website, but is almost entirely new text. The tone is also different, more serious, less bloggy. Which is a shame, because I know that light tone is what endears a lot of people to the writer who is affectionately known as "AHP" by devoted fans.

As a sort of antidote to the fact-flouting sensationalism of Kenneth Anger's Hollywood Babylon, Scandals relies on research to cover some of the most notorious events and personalities in Hollywood history, and several that are considerably less explosive. Stories include Fatty Arbuckle's murder trials and Wallace Reid's struggle with drug addiction, which are contrasted with the more benign, if highly public romances of famous lovers including Mary Pickford and Douglas Fairbanks and Bogie and Bacall.

The fourteen subjects are revealed, analyzed and treated with great compassion. These profiles are less about digging up dirt than going into the past to demonstrate how little gossip and perception of celebrities has changed.

Though I enjoyed the book for the most part, there were several things in Scandals that rankled the film nerd in me. I was distracted by little inaccuracies, like that the mansion that housed Biograph in New York was referred to as a studio lot, and bigger gaffes such as the claim that the notorious model Evelyn Nesbit Thaw's lover killed her husband when in fact it was her jealous hubby who pulled the trigger on her former lover Standford White. I'm nitpicking, but I'm always wary of any work where easily accessible facts such as these are missed.

There were also statements I took issue with, like the claim "…Jean Harlow was an ice queen, beguiling men with her aloof coolness…" What? No, there was nothing about Harlow that was icy or aloof, whether on screen or in her own life. Think of Red Dust, Bombshell and Public Enemy, among many more. The woman was all heat.

It was things like this that made me feel Petersen had done some good research, but didn't really have a true understanding of the golden era of Hollywood. She's studied it enthusiastically, and she makes interesting observations about that time, but it isn't in her bones. The depth at which she does understand the era is sufficient for an interesting read, but could prove frustrating for more devoted fans.

As one who clearly falls high on the movie geek spectrum, there was little here that was new to me, but I appreciated Petersen's analysis of the stars and their times. I especially liked the final section, in which Petersen discusses Marlon Brando, Montgomery Clift and James Dean. She makes some great observations here, discussing the way the men influenced each other, and the movie industry, in a thought provoking manner.

Overall, the book was an interesting read. Petersen has combined her academic roots and blogging experience into an intelligent and highly readable style. The text always flowed nicely and was never dry to me, though I can see how it might disappoint readers in search of something jucier. It is not likely to be a revelation for the TCM crowd, but could be a good start on classic Hollywood culture for emerging film obsessives or for those fascinated with celebrity culture.

Many thanks to Penguin/Plume for providing a copy of the book for review.