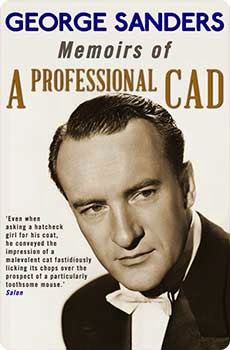 Is there anything more delightful than getting something you've dreamed of for years and having it live up to your expectations? I've wanted to read George Sanders' legendary autobiography ever since my introduction to the actor in All About Eve (1950) as a teenager. Now it is available for the first time on eBook from Dean St. Press. It is every bit as witty and entertaining as I expected.

There can be no movie as outrageous as the life Sanders lived. He was born into Tsarist Russia, eventually fleeing the Russian Revolution as it nipped at his heels. As a young man he promoted various brands of cigarettes in South America. Then came acting, and eventually movie stardom.

The facts of this cynical world traveler's life are entertaining enough in themselves: Sanders had a pet ostrich in his apartment in Argentina, after winning an ill-advised duel, he was asked to leave South America and the amusing details of his marriage to the glamorous and self-absorbed Zsa Zsa Gabor could fill a book on their own. This is all made even better because George Sanders writes exactly the way he speaks in his film roles. You can practically hear the smooth purr of his voice in your ear.

Sanders progresses through his memories as he pleases, pulling out stories as he sees fit. It has the feel of a clever party guest regaling an attentive crowd. You get a sense for the complexities of the actor's personality: his deep compassion, adoration of women (despite an of-its-time caddish line of talk about them), appreciation of beauty and excitement, and a bone-deep weariness about the madness of it all. Though he keeps a witty, humorous tone, it is for the most part a darkly comic memoir.

I was most touched by Sanders' extensive retelling of his experiences with Tyrone Power on the set of Solomon and Sheba (1959), where the younger actor died suddenly of a heart attack. He shares his admiration of Power and his brave widow Debbie Minardos, and the absurdity of the chaotic funeral services that followed. His memories are bittersweet, and reveal much about fame and the realities of a Hollywood star.

I'm glad that Sanders' memoirs end before life turned darker for him. As he writes the last words, he is still newly married to the love of his life Benita Hume, who would die of cancer seven years later. He had not suffered the death of his estranged, alcoholic brother Tom Conway and his mother or succumbed to dementia himself. That final treacherous girlfriend who would convince him to sell his beloved home in Majorca was still in his future.

There was a rocky road ahead for Sanders, but he leaves us happy, in love and enjoying the fruits of his labors as much as a deeply cynical, though also appreciative, man like himself could.

Many thanks to Dean Street Press for sending a copy of the book for review.