On Blu-ray: In a Smashing Performance Spanky McFarland Steals Kentucky Kernels (1934) from Wheeler and Whoolsey 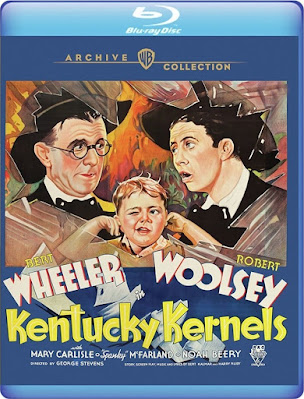 All the films I previously watched starring the Bert Wheeler and Robert Woolsey comedy duo were from earlier in the pre-code era and as I remember heavily reliant on scantily-clad chorus girls. The 1934 production Kentucky Kernels trades in shapely legs for the cute factor, a role perfectly filled by George “Spanky” McFarland who was at the time in the midst of his successful run as a member of Our Gang. On a new Blu-ray from Warner Archive, I recently enjoyed watching this little stinker wreak havoc for Wheeler, Woolsey, and anyone else in his path.

Kentucky Kernels falls near the end of the lengthy run Wheeler and Woolsey had as a comedy screen team. While this duo's humor has only slightly reached across time to me, they had a knack for physical comedy, and this production demonstrates how polished they had become in that regard.

The story is set in the South. This time the boys are unemployed vaudevillians who find themselves custodians of Spanky, who seems to have inherited an estate in Kentucky. As the pair attempts to claim the property, they find themselves in the middle of a family feud.

Mary Carlisle is sweet as the love interest, Margaret Dumont is allowed a bit more dignity than in her Marx Bros. films, and Noah Beery does his best Foghorn Leghorn bluster as the feuding Colonel Wakefield, but it is McFarland as a diligent little chaos agent who steals the film from Wheeler and Woolsey. He plays a boy with a penchant for breaking glass. He does it constantly: windows, light bulbs, bottles; whatever comes across his path.

This kid plays the kind of troublemaker that you would typically like to imagine at the bottom of a well, but Spanky is so darn charming and more nonchalant than devious about his mischief. He’s actually the most dangerous kind of troublemaker, with no conscience and no control, but it’s liberating to see him indulge in his appetite for destruction without a care in the world.

Kentucky Kernels moves along at an efficient clip, buoyed most by McFarland, but also boosted by a musical interlude featuring the charming earworm One Little Kiss, and a magnificently goofy and inventive final slapstick sequence.

For more sensitive viewers, a heads up that Willie Best (billed as Sleep ‘n Eat) is featured as one of those dispiritingly lazy characters Black actors were so often required to play in the era. The disc includes three cartoons from 1934, the Popeye shorts The Dance Contest and Sock-a-Bye Baby, and Buddy's Circus which also heavily features racial stereotypes common for the time (Warners does include a title card with information about the inclusion of this 'toon).