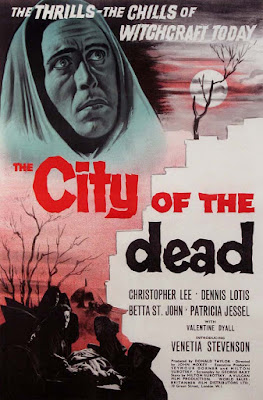 Happy Spooky Season! Since the list of spooky streaming picks that I compiled in 2019 is so comprehensive, I have decided to simply add to that selection this year with a few more titles that I have enjoyed recently. I’ve also linked to several more films below, so this is the post to bookmark for lots of creepy flicks!

A college student (Venetia Stevenson) is convinced by her professor to travel to the tiny town of Whitewood, Massachusetts town to study witchcraft. Since that teacher is played by Christopher Lee, you know right away that she is doomed. This flick from the lesser-known Vulcan Productions (the team behind it would go on to form the more renowned Amicus Productions) combines modern settings and ancient horrors in a fascinating way. [available on Tubi, Vudu free, Kanopy]

Hilton Edwards was taking a hiatus from directing Orson Welles in Othello (1952) when he made this eerie, atmospheric short with his star. It’s a dreamingly drifting ghost story, as nostalgic as it is creepy, and gorgeous to look at. [available on The Criterion Channel]

The Haunted Strangler/Grip of the Strangler (1958)

In a story written especially for him, Boris Karloff stars as a social reformer who tries to prove the innocence of a man hung for a string of strangulation killings. The film can get a bit silly; Karloff contorts his face in a hilariously bizarre way for a few scenes, but it is fun to see the actor late in his career. [available on The Criterion Channel, Kanopy]

Other suggestions on disc (links go to my reviews):

Bad Ronald, The Mystery of the Wax Museum, Two on a Guillotine, The Fearless Vampire Killers, Don’t Be Afraid of the Dark, From Beyond the Grave, A Bucket of Blood, Dracula A.D. 1972, Village of the Damned