Book Review-- Steve McQueen: In His Own Words 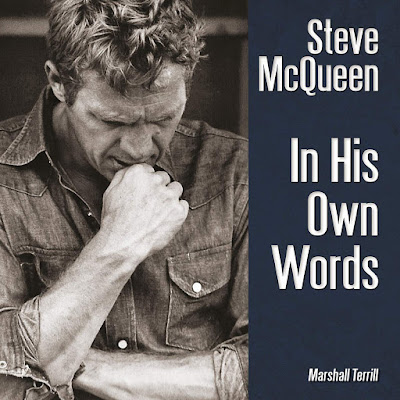 I live for myself and answer to nobody. -Steve McQueen
Steve McQueen: In His Own Words
Marshall Terrill
Dalton Watson Fine Books, 2020
Steve McQueen is known for having been a man of few words on the screen. That was partly because he had difficulty reading and memorizing his lines, but he also found little value in excessive chatter. In Steve McQueen: In His Own Words, an extensive new photographic tribute by Marshall Terrill, that tendency extends somewhat to his off-screen life. While the actor had strong opinions about his life and the world around him, for the most part he liked to keep to himself.
The book is dominated by photos, each accompanied by a quote from McQueen, with the occasional aside from Terrill when clarification or a fact check is necessary.
An interesting, sometimes unsettling story unfolds in the photos. McQueen was handsome and photogenic his entire life, but he often shows the trauma of an unsettled childhood. Many pictures show his first wife Neile beaming at him while he stars moodily into space, connected physically, but emotionally adrift. As he ages, his grizzled beard and sun-tanned skin seem to indicate a comfortable withdrawal from stardom and Hollywood life, but there’s always a little distance in those eyes.
McQueen’s childhood was almost feral at times. His father abandoned him and his young mother before he was a year old, and his mother was essentially unable to care for him, leaving him first with an elderly relative and then a reform school in Chino, California called Boys Republic. He spent his late teens riding the rails, a life without friends or family, full of violence, starvation, and uncertainty. It wasn’t until he settled in Greenwich Village and took up acting that McQueen begin to work towards stability.
McQueen didn’t enjoy acting, but it gave him the money to buy a home, get married, and perhaps most importantly to him, fund his obsession with speed in the form of cars and motorcycles. These sentiments are repeated several times throughout the book, including his belief that women should be in service to men (he fumed for days when driver Cristabel Carlisle beat him in a car race), that he preferred a simple life, and that he preferred the company of regular men.
While I learned a lot about McQueen here, by about fourth time there was a quote about his “old lady, kids, home, and food on the table” I began to lose interest. As fascinating as his rags to riches story can be, there’s ultimately not much of a story to tell here. He pulled himself up from grinding poverty, had an unusual, hugely successful career, even starting his own film company, had varied and sometimes scandalous relations with his three wives, and made sure he helped boys in the same position he had been in, but as a man he was as simple as he claimed.
The photos are gorgeous, telling a compelling visual story, though again there are many that look about the same, precisely because McQueen led a simple life, often shirtless in white pants or zipped into a racing suit. Still, this is for the most part a fascinating visual journey and one that digs deep into what made the actor the man that he was. I am also aware that there are plenty of McQueen lovers who could never get enough of him shirtless in white pants. The book is a must-have splurge for devoted fans of the actor, and perhaps less essential for more casual devotees.

Many thanks to Dalton Watson Fine Books for providing a copy of the book for review.