On Blu-ray: Vivien Leigh and Robert Taylor in Waterloo Bridge (1940) 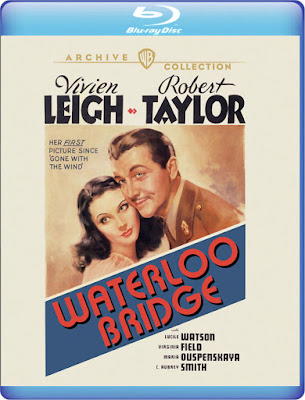 Vivien Leigh made so few films that every opportunity to see her is a great pleasure. She achieved one of her best screen performances in Waterloo Bridge (1940). I recently watched the World War I-set romantic tragedy on a new Blu-ray release from Warner Archive.
Adapted from a Robert E. Sherwood play based on his own experiences, this version of the story followed a more gritty take from the pre-code era directed by James Whale and starring Mae Clarke, and preceded the less faithful color adaptation Gaby from 1956 starring Leslie Caron. Director Mervyn LeRoy’s slick, but emotionally wrenching 1940 adaptation benefits from its sympathetic leads and solid supporting performances by reliable character actors including Maria Ouspenskaya and C. Aubrey Smith. It is perfectly engineered studio filmmaking, but Leigh’s performance gives it guts.
Leigh plays Myra Lester, a young ballet dancer in wartime London who struggles to adhere to her dance mistress’ (Ouspenskaya) strict rules. She meets army colonel Roy Cronin on Waterloo Bridge and quickly bonds with him as the pair shelter together during an air raid. Their courtship advances speedily to engagement, but then Roy is abruptly called to battle, so they cannot be married. Myra loses her job and can’t find more work in war ravaged London.
When Myra receives a mistaken notice that Roy has died in battle, she wearily turns to prostitution to make ends meet. She eventually finds Roy has actually been a POW, and is both elated and devastated to be reunited with him. For a time she continues their relationship, but she fears for his reputation if her secret is discovered.
One of the best things about Waterloo Bridge is the way the leads subvert the norms of this kind of story. Vivien Leigh’s Myra could have easily slipped into weepy melodramatic mannerisms, but she remains grounded, mostly due to her steady intensity, but also because instead of becoming sentimental, she always stays firmly in the reality of her predicament. Taylor’s character is written to be more compassionate than men typically are towards a woman in Myra’s situation, and he enhances that kindness with a sort of wonder in the magnificence of this woman he loves. For this reason, their connection feels real in a film where the plot tosses them around with brutal efficiency.
It is ultimately a story of how easily those who are marginalized can be destroyed. Myra and Roy can’t be married because of a law about when marriages can be performed, and it seals her fate. Myra nearly starves because she has no family or husband to protect her and there are few opportunities for young women to find steady employment in wartime London. When Myra meets Roy’s mother, the wealthy older woman has no understanding of her vulnerability, she takes her existential distress as a personal insult. Likewise, Roy fails to see the struggles a woman like Myra must endure simply to survive; he has only known luxury and the privilege of being a man. As a result, an innocent woman is devoured by a society that fails to support her.
While it all sounds unbearably bleak, the couple's relationship is charming, Leigh is mesmerizing, and it is a beautifully filmed production. It breaks your heart, but with great elegance.
Special features on the disc include a trailer for the film and a radio production of the drama starring Norma Shearer in the role of Myra.