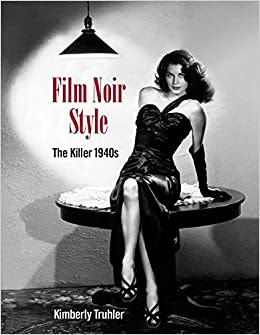 Film Noir Style: The Killer 1940s
Kimberly Truhler
Good Knight Books, 2020
Having read as many books about film noir as humanly possible, with the publication of Kimberly Truhler’s Film Noir Style: The Killer 1940s I was surprised to realize it was the first I’d read dedicated to the fashion of the genre. Given how influential the looks from these years have been on style, all the way to the present day, that’s surprising. Truhler ably manages the task of exploring the most distinctive looks of forties noir, how they were created, and their influence on fashion.
Film Noir Style covers twenty films, appropriately arranged in sections relative to World War II. By dividing the selections into pre-war, wartime, transition, and post-war, Truhler is able to note the dramatic changes in style that came with each period, where rationing, changes in the status of women, and a radically shifting United States all played a role in the looks that made it to the screen. Because those changes were so dramatic, it helps that each section begins with an general overview of each period covered.


Truhler notes the direct line from German Expressionism to Film Noir, as directors like Fritz Lang and Josef von Sternberg brought a shadowy style with them to Hollywood after cutting their teeth at the famous German studio UFA. This moodiness extends to the clothing: dark, sensual, and spare due to wartime rationing.


While many of the most famous designers are represented here: Irene, Edith Head, and Orry-Kelly among them, I was especially fascinated to learn about lesser-known costumers who created highly influential work, like RKO’s Edward Stevenson (Out of the Past [1947], Murder My Sweet [1944]) and Universal’s Vera West (The Killers [1946]). Some of these artisans seem to have drawn inspiration from their own noir-like lives, with West the most unfortunately similar to a doomed character she might have costumed.


The film selection features many clear noir classics like The Maltese Falcon (1941) and Laura (1944), but also includes some interesting outliers like The Shanghai Gesture (1941) and Lady in the Lake (1946). While they didn’t all strike me as solid noirs (not entirely in agreement that Alfred Hitchcock’s Notorious [1946] is a noir, though it’s not completely off-base as a choice), they work well together as a reflection of genre style.


While the book is filled with jaw dropping pictures of many of the fashions discussed, I found myself a bit frustrated by their arrangement. It would have been nice to have seen more of the photos presented alongside the text describing them and perhaps have some sort of footnote-like reference to make everything easy to find. Of course, it would have been ideal, and likely very difficult to manage, to have pictures of all the costumes described in the book, but the representation here is excellent. Just have a good search engine on hand.


Overall this is a thoughtfully written book which elegantly pulls together the threads of society, cinema, and the brilliance of costumers. In the end I was struck by how personal costuming can be: created for specific characters, plots, and body shapes, and yet it can influence the daily fashion choices of a wide audience around the world and across time. Something to think about the next time you shop for a trench coat or a dramatic black gown.

Many thanks to Smith Publicity for providing a copy of the book for review.
Posted by KC