On Blu-ray: Margaret Sullavan and Jimmy Stewart in The Mortal Storm (1940) 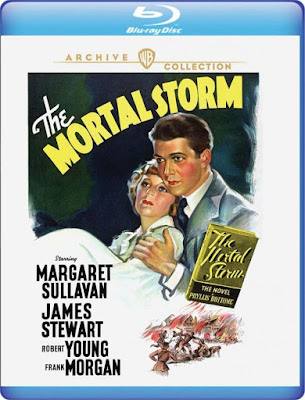 The Mortal Storm (1940) presents a personal view of how the Nazi regime first began to devastate the world. It finds the poison at the root of its rise and demonstrates how quickly it spread. While it is a difficult film to watch, the charm of its stars and director Frank Borzage’s powerful imagery make it simultaneously fascinating. I recently revisited the film via a new Blu-ray release from Warner Archive.
Margaret Sullavan stars as Freya Roth, a German college student, daughter to the respected Professor Viktor Roth (Frank Morgan), on the edge of being engaged to Fritz, one of his students (Robert Young), and loved by Martin, her lifelong friend (Jimmy Stewart). She lives with her parents (mother Emilia played by Irene Rich) and her brothers (Robert Stack and William T. Orr).
A peaceful family birthday celebration with these core characters is halted by the news that Adolf Hitler has become chancellor. Their lives are  changed in a moment. The intrusion is abrupt and decisive.
Immediately the ideological divisions among the once cheerfully united guests are made clear. All that came before, joyful scenes of skiing, singing in the pub, the birth of a foal, is slapped away. The rules of society shift.
Nazi salutes are expected. Soldiers beat non-believers in the street. No one is immune, a fact illustrated by the varied struggles of the young as symbolized by a teenage housemaid (a touching Bonita Granville), Martin’s morally solid mother (Maria Ouspenskaya), and the sudden upheaval of the lives of everyone who falls in between.
Of course it’s clear from the beginning that the entitled and briskly regimental Fritz is not the man for gentle Freya. This is one of the last of the four films Sullavan and Stewart starred in together (also Next Time We Love [1936], The Shopworn Angel [1938], The Shop Around the Corner [1940]) and their low-key camaraderie is more soothing than sizzling, but they are an appealing team.
As the heads of the Roth family, Morgan and Rich demonstrate the kind of affection and loyalty the younger couple could achieve in later years. In a harrowing prison meet-up, Borzage’s elegant composition gives the pair a moment of intimacy in the midst of the horror. Simple, spare, but somehow warm compositions like these give the film an air of wistfulness for better times and a sense of what’s good and what’s worth fighting for.
It’s impossible to miss the parallels to the present day: the turn to ideology over empathy, science, learning, even logic. This tense, scary milieu is made more meaningful decades later, where you know that things can better, and they can get worse, but there are always good people who are determined to fight for the greater good.
Special features on the disc include the cartoon Peace on Earth, the short Meet the Fleet, and a theatrical trailer.