On Blu-ray: The Bizarre, Beautiful Spectacle of The Pirate (1948) 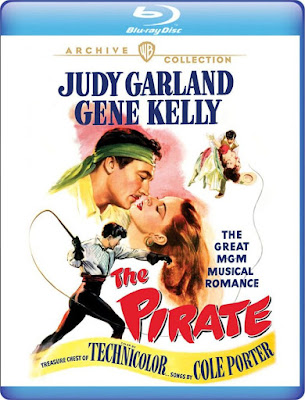 You never hear anyone say that The Pirate (1948) is their favorite musical, or even their favorite MGM musical, but this unusual and boldly vibrant film is worthy of its own pedestal. I recently re-watched the Vincente Minnelli-directed production on a new Blu-ray release from Warner Archive and I found the gaudy delight that I had admired in past viewings has retained its appeal.

Of all the set-bound musicals, The Pirate is perhaps the most tightly-confined. It exists in a brightly-colored bubble consisting of a few settings, but for the most part centers on a bustling public square meant to represent a Caribbean town.

It is there that Gene Kelly bursts onto the scene as Serafin a mischievous traveling actor setting up shop with his troop. Judy Garland is Manuela a local who is just about to marry the mayor of the city; yes it is a stretch to accept her as a Manuela.

Manuela is obsessed with the notorious Macoco, a pirate who represents adventure, virility, and escape. She is about to embark upon a life of comfort and ease as a wealthy man’s wife and the thought horrifies her. When she believes Serafin is Macoco, she falls hard, but the problem is that she sees what she wants to see when the truth is right in front of her.

This light plot serves as the structure for a giddy, lively scenario. The town square is full of extras in bizarre costumes. They are swathed in velvets and silks, stripes and polka dots, with outrageous splashes of color and clashing patterns. It’s busy and a lot to process visually, but it perfectly expresses the chaos of Manuela’s inner life which is now marching out for public view.

Kelly has played his share of rascals, but I’ve never seen him as randy as he is here. In his first number, he swirls around a cast of beautiful, haughty women, making it abundantly clear exactly what he wants and that he’s not the type to settle down. As he leans in to kiss a lovely lady, he sucks his lit cigarette into his mouth, letting it pop out when his task is completed. It is a precursor to the first time he sees Manuela, when in reaction to her beauty he lets a slow stream of smoke trail out of his mouth.

In line with the heated Mr. Kelly, Garland has never been so sultry. With her bright red lips and dreamy fits of fantasy, she is passion incarnate. Minnelli knew just how to show his star, and wife, to her best advantage. Here under his tender care she is transformed into a glowing temptress. It’s a pleasure simply to watch her raise a questioning eyebrow because she is so lovingly filmed.

The vibrant cast of characters gathered in the square does much to add to the mood of vibrancy and excitement. I found it exciting to see so many Black actors in dignified and lavish dress included in the mix, something you rarely got to see in that era. There are moments that drag a bit in The Pirate, but a glimpse of this milieu always gets things going again.

While the Cole Porter score doesn’t have the fire of his best works, the cheerfully tuneful Be a Clown is a high point. Garland and Kelly dance to the tune, but the highlight is Kelly’s dance with the Nicholas Brothers Harold and Fayard. They were a well-matched trio because all three dancers favored athletic, precise moves and high-energy choreography.

While it doesn’t have the robust roster of tunes to make it the best and brightest of the MGM musicals, this delightfully odd production is hugely entertaining, with its stars clearly enjoying the strange, but fascinating tone of it all.

Special features on the disc include commentary by historian John Fricke, a making-of featurette, a vintage comedy short and cartoon, a stereo remix of Mack the Black, song outtakes, promotional radio interviews with Garland and Kelly, and a theatrical trailer.