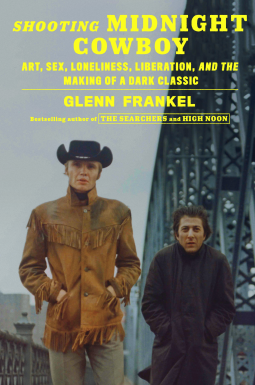 John Schlesinger was not in attendance at the 1970 Academy Awards ceremony when he won the best director Oscar for Midnight Cowboy (1969). He had his towering blonde star John Voight accept on his behalf, and asked the actor to highlight the contribution James Leo Herlihy’s source novel had made to the success of the film. For that reason I find it interesting that in writing about the making of the film, Glenn Frankel has also spotlighted Herlihy as the heart and soul of the project.

Writers, whether of screenplays or novels are rarely given such prominent recognition in the making of a film, which makes it especially satisfying to see Herlihy’s central role in the film’s production history. It is also appropriate, because the wistfully drifting spirit which defines the film comes directly from the author and the way he processed the turbulent scene in late sixties New York.

Before digging into the particulars of the production, Frankel sets the scene by using Herlihy’s story to reflect his own personal imprint on the novel and the dramatic change of the times he lived in. For a while I felt impatient to get into the production back story, but this background is essential to understanding the film and how it was made. That said I enjoyed the details of the production in the second half of the book so much more that I think these opening chapters could have been more effective if they were at least somewhat condensed.

While Midnight Cowboy was a studio production, United Artists was a different kind of studio, and Schlesinger was able to make his movie with more of an independent eye. The book is at its best when it explores how that freedom allowed a feeling of creative, collaborative community during filming and in the creation of key elements such as the script, set, and costumes. A lot of the film’s authenticity is thanks to that liberty, like the fun of costume designer Ann Roth spotting a key piece in the backseat of a hustler’s car or the way Schlesinger was able to use unusual lighting and different kinds of cameras to achieve his vision.

Frankel is also diligent in recording the stories of those made most vulnerable in the process. Often a production history will focus on the ravings of the director (Schlesinger had his moments) or the drama between the stars (in this case, Dustin Hoffman and Voight were strong collaborators). I appreciated that Frankel acknowledged less prominent stories like the emotional torment Schlesinger’s partner Michael Childers endured from the crew as his assistant and the trauma actress Jennifer Salt suffered in filming a graphic rape scene. He also acknowledges casting director Marion Dougherty’s essential role in the success of the film and the frustration she felt being overlooked for her contributions.

I found this production history more satisfying than most, partly because of how Frankel acknowledges that exploring the times in which it was made is key to understanding this particular film, but also because he gets the complexity of filmmaking and the necessity of capturing small details that affect the whole.

Many thanks to Farrar, Straus and Giroux for providing a copy of the book for review.