On Blu-ray: Real Life Marrieds Cary Grant and Betsy Drake in Room for One More (1952) 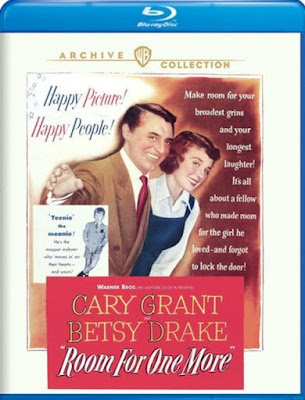 Based on the 1950 autobiography by Anna Perrott Rose, Room for One More (1952) is a charming and surprisingly edgy story about a family that fosters two troubled children. Starring the then-married Betsy Drake and Cary Grant, it’s an interesting mix of humor, drama, and ideas about parenting that are sometimes dated, but more often forward-thinking and bold. I recently enjoyed the film on a new Blu-ray from Warner Archive.
It’s amusing that Drake and Grant were actually husband and wife at the time of filming, because while they have great chemistry onscreen together, they appear so different. With her sensible hair and modest beauty, Drake looks like a middle class housewife. On the other hand, the tanned, sexy Grant, with his sleekly pomaded hair looks like a movie star. Of course, it is most important that they are believable as parents and both connect well with their movie brood (which includes the always delightful little-old-man-child George “Foghorn” Winslow).
Drake is the steady half of the pair. She knows what it takes to keep her household happy and healthy. While it is an enormous, risky thing to add two struggling children to a family that already has three, she handles difficult situations with serenity and she does so by giving the kids the power to make their own happiness and security.
Grant has his own moments of parenting brilliance. His is the final decision in bringing teenaged orphan Jane (Iris Mann) into the fold for good and he has an amusing discussion about the birds and the bees with a clueless Jimmy-John (Clifford Tatum Jr.). However, his primary job is to be the family doofus and he fills that role brilliantly, with double takes, physical humor, and an instinct for how to draw the most hilarity out of his interactions with a cast of children he seems to enjoy.
The Rose house is a chaotic tumble of adorable children and animals, but there are a couple of things that keep the film from falling into sloppy sentimentality. One, Jane and Jimmy-John are deeply affected by the trauma they’ve experienced in their young lives and while the solutions to their anguish are occasionally a little too pat, they’re based in practical thinking. The other, more amusing element is that this family film is filled with references to Poppy’s extreme horniness in a setting where fulfilling the needs of five children is a 24-hour job.
It’s an unusual film, somehow both sweet and brutal, and always attuned to the fact that we are at our best when we look out for each other.
Special features on the disc include the classic cartoons Operation Rabbit and Feed the Kitty, and a theatrical trailer.
Many thanks to Warner Archive for providing a copy of the film for review. To order, visit The Warner Archive Collection .
Posted by KC