On Blu-ray--Laurel or Hardy: Early Solo Films of Stan Laurel and Oliver Hardy 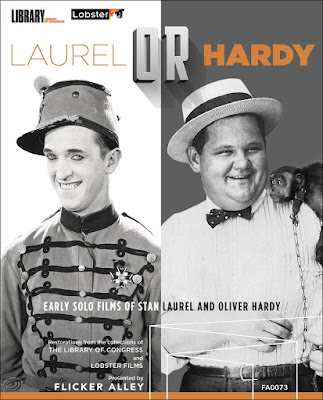 Before Stan Laurel and Oliver Hardy became one of cinema’s greatest comedy teams, they each had thriving solo careers in silent movies. Now a new release from Flicker Alley, Laurel or Hardy: Early Solo Films of Stan Laurel and Oliver Hardy, brings thirty-five of these early films to Blu-ray, newly restored by the Library of Congress and Blackhawk Films and featuring fresh piano scores by some of the best accompanists in the business.
Often billed as “Babe” Hardy, Oliver Hardy appeared in hundreds of films early in his career, both as star and bit player. Laurel made fewer films as a solo act, but was lead player in more of them than his future partner.
Music hall veteran Laurel seems to have come to the movies with his screen persona essentially developed. His toothy grin, occasional fits of bawling with mouth wide open, playful impishness, and a general feeling of being resourceful, but also tossed about by the world all transferred to his partnership with Hardy. Aside from playing second banana to Larry Semon (whom he disliked) in Bears and Bad Men (1918), Laurel is the main attraction in the titles featured here.
Hardy’s screen image was much more diverse in his early years. He shows himself to be the stronger actor of the two, with an ability to pivot from angry bully to soft Mama’s boy so smoothly that he sometimes seemed like different people from film to film. He often plays support to other players in his shorts here: Semon (again) and the Charlie Chaplin impersonator Billy West among them. His appearance is also quite different: Laurel never went heavy on the make-up, while Hardy often wore heavy eyebrows and a mustache, a look which dates his early films more than his eventual partner’s.
The booklet included in the set is a helpful guide to the period and the films, adding important context about where each man was in his career at the time of filming and highlighting early concepts that were later revisited in the films the comedians made as a duo.
Overall, the effect of the set is a bit stunning. When you think of what it must have taken to restore them, to see these films that are over a century old looking as sharp and clean as they do and accompanied with such loving care is miraculous . They’re important because of their place in film history, but they’re also a riot to watch and a testament to the timeless nature of great comedy.
Many thanks to Flicker Alley for providing a copy of the disc set for review.
Posted by KC