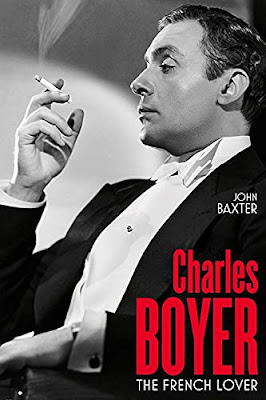 Charles Boyer: The French Lover
John Baxter
University Press of Kentucky, 2021
I love Charles Boyer. Several of his films are among my favorites. He’s one of those actors who knows how to deliver, whatever the quality of the role or film. Despite this, I’ve never thought much about him. That’s why I enjoyed John Baxter’s new biography of the French actor, which digs about as deep as possible into the life of this mysterious man.
Why hasn’t Boyer seen a revival or lasting widespread interest in his career? Baxter pins that on lack of advocacy. An only child, with only one son who pre-deceased him, there simply wasn’t someone close to the actor to boost his work over the years.
That’s a shame, because Boyer pulled off an unusually diverse career. In a rare feat, he moved between Hollywood and Europe throughout his career, making bonafide classics in all the great film industries of the Western world, in addition to finding success on both Broadway and West End stages, radio, television, and even as a recording artist. It is a little astonishing that the work alone hasn’t elevated him more in classic film circles when it includes titles like Mayerling (1936), Gaslight (1944), The Earrings of Madame de… (1953), and Love Affair (1939), and that’s only the cream of a rich, enduring career.
While his acting life was not without its challenges, there’s a certain smoothness to Boyer’s career. His success almost feels inevitable. While it took him a while to find his stride, he steadily moved from a childhood in the peaceful community of Figeac to the theatre and films. He had a knack for making the right connections and understanding how to overcome his flaws. There was luck, but also a steady push towards his goals. Part of that success comes from his adaptability; when films didn’t work, he turned to the stage, when television arrived, he not only accepted the medium, but became a producer and made a fortune.
In fact, most of Boyer’s life story feels steady. There are plenty of successes, but there’s never one breakout moment where he finds stardom, but rather a deliberate, but certain progression towards fame, acclaim, and wealth. The same can be said for his friendships and his community involvement. He had a remarkable amount of control over his life, from the shape of his career to his relationships, including an enduring marriage to his wife Pat.
The one place where Boyer faltered was with his son Michael. He and Pat never found space in their lives for their only child. Left to his own devices, with more wealth than parental involvement at his disposal, the younger Boyer never found his place in life and eventually committed suicide.
Boyer would follow the same path as his son. When Pat became ill with cancer and passed away after a relatively brief illness, he took an overdose of sleeping pills and joined her. His family losses are startling given the relative smoothness of the rest of his life.
This simple, but engrossing life story unfolds with efficiency and a nice amount of detail that reveals the man behind the star persona. It is a well-written book, though there are a few obvious inaccuracies around casting (an odd mix-up of Jean Arthur and Irene Dunne roles) that made me a bit wary about how straight the facts were overall. It is in essence an engrossing book though; I found myself wanting to read more, but at the same time, the story felt complete.
Many thanks to University Press of Kentucky for providing a copy of the book for review.
Posted by KC